US Secretary of State Rex Tillerson demanded 'Iranian militias' to leave Iraq, in an effort to curb Iran's influence. Here's who he is talking about and how they can influence Iraq:

US Secretary of State Rex Tillerson was in Riyadh on Sunday, the same day as the first meeting of the joint Saudi-Iraqi coordination council. Attending the council meeting, he pursued efforts to curb Iran's influence in the region in talks with Gulf allies.

Tehran is the historical rival of Riyadh, and exerts its influence over Baghdad. That caused tensions between Iraq and Saudi Arabia.

"Certainly Iranian militias that are in Iraq, now that the fighting against [Daesh] is coming to a close, those militias need to go home," Tillerson said at the press conference.

Abadi, presuming Tillerson was talking about the The Popular Mobilisation Forces (PMF), responded him saying that the forces in Iraq consist solely of Iraqi nationals. "The PMF are part of the Iraqi institutions and should be encouraged because they will be the hope of country and the region" he added.

Who are the PMF in Iraq? How influential are they?

Let's break it down.

After the US invasion of Iraq in 2003, the Iraqi army took a significant body blow. Eleven years later, when Daesh attacked the country's strategic city of Mosul, thousands of Iraqi army troops fled in a day and Daesh took control of the city.

It was then that Hashd al Shaabi emerged to fight against Daesh in the country alongside the army. And the support they got from Iran has led to the group widening its influence. That's when Iranian Revolutionary Guards stepped up as advisers to those militia groups under the umbrella of Hashd al Shaabi.

What is Hashd al Shaabi?

They are a Shia armed umbrella group also known as the Popular Mobilisation Forces (PMF).

It has played a critical role in the country since 2014 – when Mosul, one of the three largest cities of Iraq, fell into Daesh's hands.

The Iraqi constitution says the Iraqi army is the country's only legitimate armed force. But Hashd al Shaabi became an exception when the army failed in its fight against Daesh.

The group is largely funded and commanded by Iran – which is predominantly Shia.

The Tehran government and Revolutionary Guards have been influential in Baghdad for the past ten years, since the US invasion toppled Saddam Hussein. Iraq's prime ministers have had close ties with Iran ever since. Hashd al Shaabi is only another sign of that influence.

Made up of more than fifty sub-groups, Hashd al Shaabi also includes a few Yazidis, Christians, and some Sunni tribal leaders that have fought alongside the group.

According to a Carnegie Crisis Group’s report in 2016, about 99 percent of Shia in Iraq supported Hashd al Shaabi in its fight against Daesh, especially when the Iraqi army was in retreat and Daesh took control of huge swathes of the country. However, the country's non-Shia population of Iraq viewed their move as an “invasion.”

Economic reasons also influenced many people in the region to join the militia group. Made up of volunteers, most of its fighters do not have much education and work as day labourers making very little money, as little as $20 a week.

In 2015, the Iraqi government decided to take control and hold the group accountable for their actions. The decision was also taken that they should fall directly under the control of the prime minister and should be paid.

A year later in 2016, Iraq's parliament passed legislation legitimising the PMF as an independent organisation within the Iraqi army.

Indeed, many members who joined the group had regular jobs, and their membership of the group was only temporary. They left the group when their neighbourhoods or towns were taken back from Daesh.

How did it become what it is today?

"Citizens who are able to bear arms and fight terrorists, defending their country and their people and their holy places, should volunteer and join the security forces to achieve this holy purpose.”

Those were the words of Ayatollah Ali al Sistani, the highest Shia religious authority in Iraq. He made the call for the fight against Daesh on June 12, 2014, after Daesh captured Mosul and committed serious crimes against civilians.

As Hashd symbols spread throughout the Shia neighbourhoods, thousands of Iraqi Shias, some of whom had already borne arms before Sistani’s call, then mobilised under Hashd al Shaabi in response to Sistani’s call.

Not long after, Iran took advantage of this call, and began funding and arming the leaders of each small group in Shia-populated neighbourhoods.

In need of combat support on the ground, the Iraqi army has worked hand in hand with the PMF since its founding in 2014.

Even though the law legitimising PMF forces did not allow for independent political links, the law did not alter the existing command structure of each respective militia, allowing it to be an almost independent unit within the army.

As independent units are supported by Iran and not the Iraqi central government, they gained more power and popular support.

The number of militiamen is around 130,000-strong, with nearly half of them are fighting in six big groups, whose commanders have links to the Iranian Revolutionary Guards.

The biggest group is the Bedr Organisation with more than 25,000 armed men. The group's commander, Al Amiri, is also the general commander of all Hashd al Shaabi. He used to fight against Saddam Hussein during the Iran-Iraq war in the 1980s.

Al Amiri publicly announced that “they owe their success to the Iranian military advisers.” Many politicians, who talked to TRT World, believe he is potentially set to be Iraq's next prime minister.

Initially emerging as a small self-defence group against Daesh, the PMF has expanded across the country and its power is enough to influence even domestic politics.

“The independent loyalties and ideologies of the forces within the PMF will still exist and often act against the government’s policies,” said Middle East Research Institute (MERI) in a 2017 report.

But the concern about Iraq’s PMF is not only voiced by MERI.

Although playing an important role in driving out Daesh in Iraq, human rights groups have often accused PMF of extrajudicial killings, torture, imprisonment, and forced eviction of civilians, especially from Sunni majority areas.

In 2014, a deputy commander of the Hashd al Shaabi around Abu Ghraib, Lieutenant Colonel Haider Mohammed Hatem, said they label their target areas in the rural areas as “killing zones.”

“In these parts, there are no civilians,” said Lieutenant Colonel Hatem. “Everyone in these killing zones, we consider Islamic State (Daesh).”

“Many Sunnis were grabbed in the streets or dragged from their homes and instantly killed. In the first week of the events, militiamen drove around with speakers shouting for Sunni men to come out of their homes. On 13 January [2016], more than 100 men were taken and have not been seen since,” a man from Muqdadiya told Amnesty.

Accusing PMF of committing war crimes, human rights organisations warned that as a legal government entity, it still embodied different ideologies that could threaten the government’s legitimacy, territorial integrity and the post-conflict security of Iraq.

Indeed, PMF’s role in the fight is already a source of political tension for the major actors in the region, such as the US. 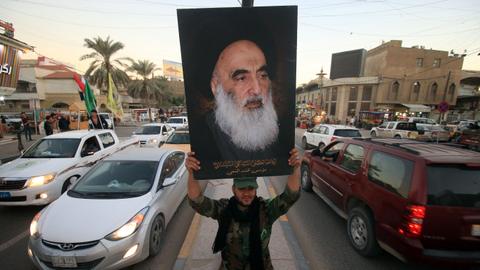