An explosive device, that was planted on a road by regime forces, detonated as a convoy of opposition fighters passed by.

A roadside bomb and regime shelling killed at least 19 people, most of them opposition fighters, in southern Syria's Daraa province on Thursday, a monitor said.

The Britain-based Syrian Observatory for Human Rights (SOHR) said an explosive device placed on a road by regime forces detonated as a convoy of opposition fighters passed by.

"After the blast, civilians from nearby came to the scene and the regime shelled the area," Observatory director Rami Abdel Rahman, said.

He said 13 of the dead were from local opposition factions and at least three others were civilians. The death toll could rise as several people were suffering from serious injuries.

The regime forces have been occasionally accused of planting explosives to target opposition fighters.

Daraa province is one of the last remaining bastions of opposition forces, who retain control of a majority of the region even as they have been routed elsewhere.

More than 320,000 people have been killed in Syria since the conflict began with anti-regime protests in March 2011.

Algeria to accept Syrian refugees stranded at the border

Algeria has agreed to take in 41 Syrian refugees trapped since mid-April in a desert area that borders neighbouring Morocco, the foreign ministry said on Thursday.

The decision comes two days after the UN refugee agency said the plight of the refugees, which includes a pregnant woman, was "untenable," urging Algeria and Morocco to work for a solution.

In a statement carried by APS news agency, the foreign ministry said Algeria would take in the refugees as an "exceptional humanitarian gesture."

It said the decision was also meant to mark the holy Muslim fasting month of Ramadan, during which the pious are urged to be charitable and devote themselves to prayer.

The refugees would be housed and fed and, if they wish, be reunited with family members in a third country, a ministry spokesman said in the statement carried by APS.

More than 40,000 refugees from Syria have settled in Algeria since the start of civil war in Syria in 2011. 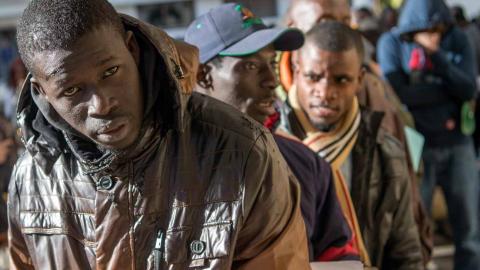