Yazidis plan a return to Sinjar where memories of massacre linger

Daesh killed or kidnapped some 9,000 Yazidis in Iraq, according to a recent study, prompting mass displacement. But now hundreds of Iraqi Yazidis condemned to life in camps want to leave for whatever is left of home.

It's been three years since the Sinjar Massacre in Iraq in which Daesh rounded up thousands of Yazidi men and beheaded or shot many of them.

What happened around Mount Sinjar and in Tal Afar destroyed countless Yazidi families. The women were raped — some sold as slaves and others kept by Daesh fighters for sex. As families tried to escape, many people died of starvation and thirst.

Years later, without water and electricity, the unending harsh conditions at the squalid camps in Iraq have prompted hundreds of Yazidis to consider returning to the place they used to call home.

"We're going back to Sinjar. It's not good there either, but we have nothing here. No electricity or water," said Khaled Hassan, a displaced Yazidi.

"...Here we live in tents. There we can at least get a skeleton building. It's very hot here, and it's not good at all."

The Yazidis, a Kurdish minority group, practising an ancient religion, have borne the brunt of Daesh's brutality, with 9,000 of them killed or kidnapped, according to a recent study. 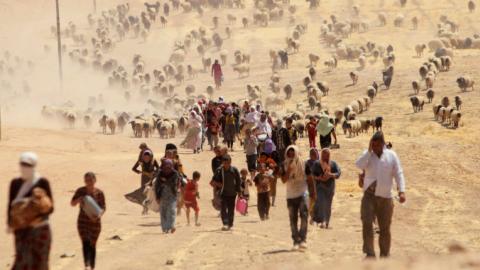