Amnesty International criticised the EU's decision to train Libyan coastguards in a report released on Thursday. A double-edged sword, the migrants risk death at sea, or human rights abuses if they are returned to Libya.

The European Union's strategy of turning to Libya for help in slowing down the number of migrants attempting to reach Europe through the Mediterranean on clumsy boats has been called "reckless" by the Amnesty International on a report released on Thursday.

Looking at Libya, a country in chaos where migrants take off for the difficult journey, the EU has created "A Perfect Storm" – the title of Amnesty's report – that could hammer often-desperate migrants with a double vengeance. They face the risk of dying at sea or grave human rights abuses once they are returned to Libya and become trapped there, the human rights group said.

More than 2,000 migrants to Europe have died at sea so far this year while over 73,380 have reached Italy, the report said, citing figures from Italy's Interior Ministry. By the year's end, the number of arrivals is expected to match or exceed the 181,400 who made it in 2016, which was more than in the two previous years, the report said.

The European Union has been casting about for ways to deal with the crisis, notably looking to Libya, which has two rival governments, for help in preventing departures. The EU is focusing in particular on equipping and training the Libyan coast guard and navy to conduct sea rescues and to lead the fight against smuggling and trafficking networks.

Amnesty said it was "deeply problematic" to unconditionally fund and train Libya, where human rights are lacking and the coast guard has been known for violence and even smuggling.

The group cited an August incident off Libya's coast in which attackers shot at a Doctors Without Borders rescue boat. A UN panel of experts on Libya later confirmed that two officers from a coast guard faction were involved.

In May, the Libyan coast guard intervened in a search-and-rescue operation another non-governmental organisation was performing. The coast guard officers threatened migrants with weapons, took command of their wooden boat and took it back to Libya, Amnesty reported.

"The current situation with the Libyan coast guard is absolutely outrageous," Iverna McGowan, who leads Amnesty International's European Institutions Office, said in an interview in Brussels. "It is unconscionable that the EU ... would allow certain rescue operations that we know are inadequate and trust that with people's lives."

The worst may go unseen, McGowan said. "People who are disembarked in Libya are going back to unlawful detention centers where they are facing torture, rape and other unthinkable abuses," she said.

The report argues that NGOs need to continue participating in migrant rescues even though Amnesty says responsibility for the task rests with governments. It makes no mention of the recent threat by an overwhelmed Italy to prohibit some NGOs from bringing migrants to ports in southern Italy.

Amnesty said a "multi-country humanitarian operation" under control of Italy is urgently needed and that use of Libyan resources should be conditional on certain limitations, including no-rescue operations outside territorial waters and the transfer of all rescued migrants to EU or other appropriate vessels.

EU's attempts to tackle the crisis

EU Migration Commissioner Dimitri Avramopoulos conceded at a recent news conference in Paris that the EU is drawing on a country in "very precarious conditions."

The European Union executive on Wednesday beseeched member states to step up their efforts and show goodwill in helping Italy and Greece cope with the surge in migrants crossing the Mediterranean.

EU Commission Vice President Frans Timmermans said, to the applause of legislators at the European Parliament, that "it would already make a world of difference in Europe if every single member state would live up to their commitments to show solidarity."

The EU made commitments to ease the migrant pressure on Italy and Greece by having other member states take in some of the refugees who have made the dangerous Mediterranean crossing, but several countries in eastern and central Europe have shown little or no appetite for doing so.

Conference in Rome on the migrant crisis

Alfano and Le Drian were speaking ahead of a conference on migration in Rome with foreign ministers from African nations – used as transit routes by migrants – and other EU nations, including Austria, Spain and the Netherlands.

Rome will hold a meeting on Thursday where foreign ministers from European and African countries affected by the migrant crisis will come together in addition to EU and UN representatives.

Italy's interior ministry says the number of migrant arrivals so far this year is nearly 20 percent higher than at the same time in 2016.

Italian Foreign Minister Angelino Alfano said the Ministerial Conference will make "new pledges to finance activities that increase Libya's capacity to control its southern borders, that help the International Organization for Migration to perform assisted voluntary returns from Libya and that contribute fight the cancer of smugglers of migrants". 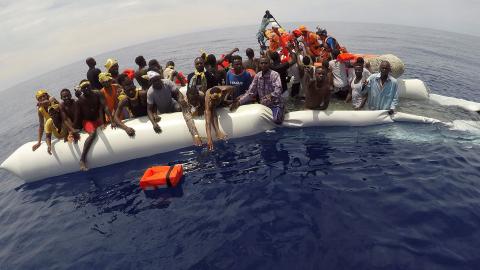