As Ould Abdel Aziz steps down after two terms, will his close ally Ould Cheikh Mohamed Ahmed Ghazouani take over in a country that has been wracked by coups since 1978?

Mauritanians will go to the polls on June 22 to vote for a successor to President Mohamed Ould Abdel Aziz, 62, who is standing down after nearly a decade in power.

Voters are set to choose between six candidates looking to succeed the incumbent president.

Why is the incumbent president not running again?

Ould Abdel Aziz is not permitted to run again for public office due to the constitutional limit on presidential terms. Mauritania’s constitution does not allow him to stand for a third term.

Who is Mohamed Ould Abdel Aziz?

Ould Abdel Aziz, a former general, was a key figure in a successful coup d’etat in 2005, going on to lead his own coup in 2008 that ousted then-president Sidi Ould Cheikh Abdallahi.

Following the coup, elections were held in 2009, which Ould Abdel Aziz won. He continued to hold onto power with victory in Mauritania’s 2014 elections, winning in the first round.

Why is this election significant?

On June 22, Mauritanians will elect a president for the next five years. According to a decree signed by Ould Abdel Aziz. Should the outcome require a second round, July 6 is set for the run-off.

The military and security forces are entitled to vote the day before the election. It is set to be a historic election, making it the first democratic handover of power following the country’s multiple coups between 1978 and 2008.

Opposition parties have warned of a potential “hold-up” in the election and accused the Independent National Electoral Commission (CENI) of being “totally won over by the regime’s candidate”, Mohamed Ould Cheikh Mohamed Ahmed.

Mauritanian authorities have further rejected the opposition’s demand for foreign observers during the vote. The CENI chairman instead reassured citizens that “everything will definitely move towards a vote where transparency will be protected, even without external observers”.

Who are the main candidates?

Mauritania’s presidential candidates have conducted extensive campaigning to persuade voters of their legitimacy in succeeding Ould Abdel Aziz. They are as follows:

Ould Cheikh Mohamed Ahmed Ghazouani is a former minister of defence, and a close associate of the current president. Ghazouani is also a retired general and the army’s former chief of staff.

In early March 2019, he resigned from the ministry of defence to run for the presidency in the upcoming election.

He is largely considered the frontrunner in the election, as a longtime ally of current president, whose two elected five-year terms were preceded by a military coup in 2008.

His main challenger is Sidi Mohamed Ould Boubacar, who hopes to secure enough support to ensure a run-off vote on July 6.

Ould Boubacar became Minister of Finance in October 1990 and was named Prime Minister on April 18, 1992. He served in his last capacity until he was dismissed by Maaouya Ould Sid'Ahmed Taya on January 2, 1996, who was later head of the 2005-2007 transitional government.

His electoral programme is based on general economic reform.

“The priority for Mauritania today is to recover its economy, which is in crisis. My principal objective is to strengthen national unity, which has suffered a lot in recent years. My ambition is to fight against poverty and inequalities. My commitment will help to revitalise the hope of a better future for our country,” he said.

Ould Boubacar is supported by a coalition comprising of the Islamist party Tawassoul, the main opposition group in Mauritania.

Ould Dah Ould Abeid is a world-renowned and award-winning anti-slavery and human rights activist from Mauritania.

He is running for president as a candidate for the Initiative for the Resurgence of the Abolitionist Movement, a leading anti-slavery group.

“I will do everything possible to remove slavery, racism and torture, which are set up as a system of management by a small entity around a very corrupt head of state,” he said, according to a statement found on his electoral campaign website.

Ould Mouloud is a professor of history at the University of Nouakchott and President of the Union of Forces of Progress, a neo-Marxist group, and is running for the historic opposition group formed by Ahmed Ould Daddah, President of the Rally of Democratic Forces.

Ould Mouloud has called the youth to rise in an "electoral revolution", urging them to "overthrow the regime through the ballot box”.

Hamidou Kane is a journalist and previous presidential candidate in Mauritania’s 2009 elections, winning less than two percent of votes.

The candidate for the Coalition for Coexistence, a coalition of parties, he was a deputy in the Mauritanian parliament and ran in a previous presidential election.

El Mourteji El Wavi is a financial expert and senior official in the Mauritanian Treasury. His campaign platform according to his website is “involving youth in running the country and providing job opportunities for the unemployed.''

What are the expected outcomes for the election?

Nearly 30 percent of voters will vote for Ould Ghazaouani, with another 23 percent for Ould Boubacar, according to a poll conducted by the Mauritanian Centre for Strategic Studies and Research (CMERS) distributed among 1,300 people in the capital of Nouakchott last week.

Four other candidates in the conservative Muslim nation are outliers in the race, according to the poll. The anti-slavery activist Ould Dah Ould Abeid won 9.5 percent of the early polls, while veteran opposition figure Ould Moloud garnered 3.7 percent.

What’s next for Mauritania?

The election campaign is set to run from June 7 to 20. In case of a second round, it will be held on July 6.

Mauritania’s next president will be urgently required to tackle the country’s poor human rights record by taking a tougher stance against slavery and human trafficking.

Amnesty International and 32 local human rights organisations have called on all candidates for this month’s presidential elections in Mauritania to sign a manifesto consisting of 12 commitments to promote and protect human rights in Mauritania.

The manifesto calls for a public commitment to end slavery, human trafficking and discriminatory practices through the implementation of new laws, policies and campaigns.

It also calls for a new law to combat violence against women, which would be adopted within the first year of the new president’s inauguration and assumption of office.

Aissa Boukanoun is a Senior Producer for TRT Arabi.

Mauritania heads to legislative, local polls ahead of presidential election 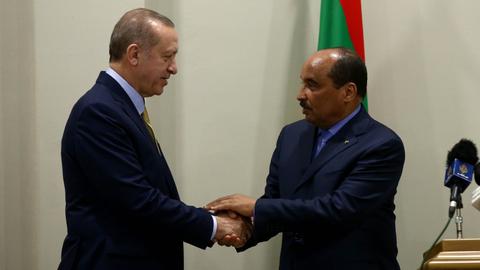