Under the agreement, humanitarian zones will be created in opposition-held territory in Idlib, in parts of Homs province and in the opposition enclave of Eastern Ghouta near Damascus.

Russia, Turkey and Iran on Thursday signed a broad agreement on creating humanitarian de-esclation (safe) zones in Syria after a new round of peace talks held in Kazakhstan's capital Astana.

"Over the past two days, the participants in the Astana talks reviewed the implementation of the ceasefire agreement and the cessation of hostilities," Kazakhstan's foreign minister Kairat Abdrakhmanov said of a truce brokered by Moscow and Ankara in December.

"As a result the guarantor countries agreed to sign a memorandum on the creation of de-escalation zones in Syria."

The heads of the delegations from the three countries that act as guarantor states of the Astana peace process signed the document even as a delegation of the Syrian opposition walked out of the talks.

The proposal calls for the creation of safe zones in rebel-held territory in the northwestern province of Idlib, in parts of Homs province in the centre, in the south, and in the opposition enclave of Eastern Ghouta near Damascus.

Turkey's Foreign Minister Mevlut Cavusoglu welcomed the deal that bans weapons use and allows humanitarian aid to flow to these regions.

TRT World's Abubakr al Shamahi has more on the deal.

The fourth round of talks in Kazakhstan's capital Astana began on Wednesday to find a way to reinforce a ceasefire put into place at the end of last year but which has been widely violated.

The Astana talks, which first convened in January, are running alongside UN-backed discussions being held in Geneva.

"Today in Astana I think we have been able to witness an important promising positive step in the right direction in the process of de-escalation of the conflict," UN Special Envoy for Syria Staffan de Mistura said after the agreement on Thursday.

UN Secretary-General Antonio Guterres is also encouraged by the agreement, a spokesman for the secretary-general said.

"It will be crucial to see this agreement actually improve the lives of Syrians," said the spokesman.

Turkey, which supports opponents of Bashar al Assad's regime, joined Assad allies Russia and Iran in sponsoring the negotiations after the assault on Aleppo in December.

The next round of the Astana talks will be held in mid-July.

Syria's armed opposition on Thursday said it could not accept creating safe zones in Syria because it threatens the country's territorial integrity. The opposition also said it would not recognise Iran as a guarantor of the peace plan.

"We are against the division of Syria. As for the agreements, we are not a party to that agreement and of course we will never be in favour (of it) as long as Iran is called a guarantor state."

Abu Zaid also said that there is "a huge gap" between Russia's promises and actions. 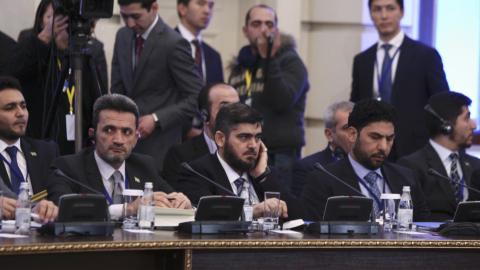 Syrian rebels and the regime have started peace talks. What's next?