Iraqi PM Abadi warns of 'dangerous violations' in May election

Haider al Abadi told a news conference that a report presented to the government recommended a partial manual recount of the vote, raising the prospect of further uncertainty in Iraq.

Iraq's prime minister said on Tuesday there were "dangerous violations" in the May 12 parliamentary elections won by a bloc led by Shia cleric Muqtada al Sadr, a long-time adversary of the United States, who also opposes Iran's sway in Iraq.

Haider al Abadi told a news conference that a report presented to the government recommended a partial manual recount of the vote.

He warned that some members of Iraq's electoral commission would be banned from travelling abroad without his permission.

The prime minister said he had initially been in favour of moving forward with the political process after the election because Iraq had a history of some violations that were usually worked out.

But Abadi said he was alarmed after studying the report's findings.

Abadi's stance raises the prospect of further uncertainty in Iraq at a time when political blocs were starting the complicated process of forming a new government, watched closely by Baghdad's Western allies.

Sadr, who led two violent uprisings against US occupation troops after the fall of Saddam Hussein in 2003, secured a surprise victory in the poll by tapping into resentment with Tehran's deep influence in Iraq, its most important Arab ally. 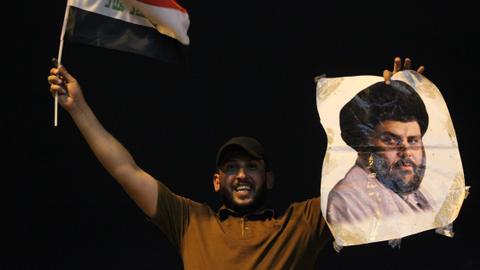