Ahed Tamimi, 16, has been arrested following a viral video showing her taking on Israeli soldiers in occupied West Bank. Her family hopes she will be released soon.

Ahed Tamimi, a 16-year-old Palestinian girl, who has become symbol of Palestine resistance after a video of her confronting Israeli soldiers went viral, is expected to appear in court on Thursday.

Ahed, her mother Nariman Tamimi, 43, and her cousin Nour Naji Tamimi, 21, were filmed in Nabi Saleh village, near Ramallah repeatedly hitting two Israeli soldiers and shouting at them to leave their property in December 15 while protesting against the US recognition of Jerusalem as Israel's capital.

After their video has attracted attention around the world, dozens of Israeli soldiers raided their home and detained Ahed. One day later, they also took her mother Nariman and her cousin into custody.

Three women appeared before a court last week and their detention were extended two times. The young girl is expected to appear in court again on Thursday.

"It is a complex and confusing feeling. It is a mix of anxiety, fear, sadness, and anticipation along with my feeling of honour, proudness and confidence but at the end of the day my emotions as a father overcome me and I cry," said Ahed's father Bassem Tamimi.

Ahed's brother Mohammed Tamimi said he has missed his mother, sister and cousin a lot and hoped they will be released soon.

TRT World’s Nicholas Morgan spoke to Ahed family in the occupied West Bank ahead of the court hearing.

The latest case is hardly Ahed’s first brush with the Israeli authorities.

In 2012, Istanbul’s Basaksehir Municipality awarded her with the Hanzala Courage Award for defying Israeli soldiers who had arrested her brother.

At the time, Turkish Prime Minister Recep Tayyip Erdogan (now president) met with the Palestinian girl personally to convey his admiration for her bravery.

Ahed’s father, mother and brothers have also all been repeatedly arrested by the authorities for their fierce – and often vocal – opposition to Israel’s decades-long occupation.

On December 6, US President Donald Trump recognised Jerusalem as Israel’s capital, drawing condemnation from across the Muslim world and sparking angry protests in the Palestinian territories.

Since then, at least 15 Palestinians have been killed – and thousands more injured – in clashes with Israeli security forces in the West Bank, East Jerusalem and Gaza Strip, according to the Palestinian Health Ministry. 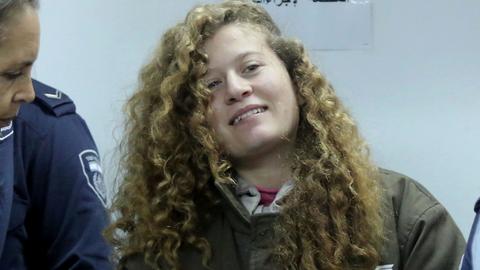