Kenya's opposition coalition rejected the preliminary results of the presidential election on Wednesday, calling them "fake" and disputing tallies that showed President Uhuru Kenyatta well on his way to being re-elected.

The allegation by Kenyatta's main challenger Raila Odinga set the stage for a protracted and possibly violent dispute over the results of Tuesday's election to decide the leader of east Africa's most vibrant democracy. Similar allegations of voter fraud after the 2007 general election—where Odinga made an unsuccessful bid for the presidency – led to months of ethnically-driven political violence that killed 1,100 people and displaced 600,000.

"It is the machine that has voted," Odinga told reporters. "These results are wrong."

Odinga objected to partial results released by the Independent Electoral and Boundaries Commission (IEBC) that show Kenyatta ahead by 54.8 percent of votes counted to 44.3 percent for Odinga – a margin of nearly 1.4 million ballots with more than 80 percent of polling stations reported.

​Odinga claimed that the IEBC had not provided documents that would show how the tallies were arrived at.

He alluded to the death of Chris Msando, a key administrator of a biometric voting system that the IEBC said would guard against fraud, whose tortured and strangled body was found on the outskirts of Nairobi earlier this month.

"We fear that this is the precise reason why Mr Chris Msando was assassinated," Odinga said, referring to his fraud claims.

Odinga, 72, is taking his fourth and likely final stab at the presidency. He claims the elections in 2007 and 2013 were stolen from him, and has occasionally said he could only lose this year's vote if it was rigged.

The IEBC was undeterred by Odinga's statements, with commissioner Roslyn Akombe saying that despite a request by an unnamed political party to stop publishing preliminary results, "as a commission we decided that as part of the commitment we made to the voters and the Kenyan people, transparency and accountability are part of them."

"This is why, as a commission, we have decided we will continue to display the results," she said.

The general election was the first test of a new, complex election protocol that resulted from the devolution of power to Kenya's 47 counties after a post-conflict constitutional reform.

The contest between Odinga and Kenyatta – old foes who previously faced off when Kenyatta was first elected in 2013 – was expected to be close. And emotions are running high after an unpleasant campaign was marred by opposition's claims of a plot to rig the vote.

"I don't expect anything else from NASA," he said, referring to Odinga's National Super Alliance party.

Tuesday's vote went off peacefully, and the IEBC moved quickly to deal with any complaintsespite reports of some technical glitches and delays, .

This is a milestone in elections as prisoners are allowed to exercise their democratic right for the first time. #WeweNdioKusema

The presidential election is set to be the final showdown of a dynastic rivalry that has lasted more than half a century since the candidates' fathers Jomo Kenyatta and Jaramogi Odinga went from allies in the struggle for independence to bitter rivals.

The men belong to two of Kenya's main ethnic groups, Kenyatta from the Kikuyu, the largest, and Odinga from the Luo.

Both have secured formidable alliances with other influential communities in Kenya, where voting takes place largely along tribal lines.

Kenyatta, 55, is seeking re-election after a first term in which he oversaw a massive infrastructure drive and steady economic growth of more than five percent.

But he has been criticised for soaring food prices – with prices jumping 20 percent year-on-year in May – and massive corruption scandals on his watch.

On Tuesday, Kenyatta urged Odinga to accept the result should he lose. "I also want to say that if I lose, I will accept the will of the people," Kenyatta said after voting.

Later, Odinga also said that he would also accept loss "in the unlikely event that I lost fairly".

The winner needs one vote more than 50 percent, and at least a quarter of the vote in 24 of Kenya's 47 counties.

In addition to a new president, Kenyans are electing lawmakers and local representatives, the result of a 2010 constitution that devolved power and money to the counties. 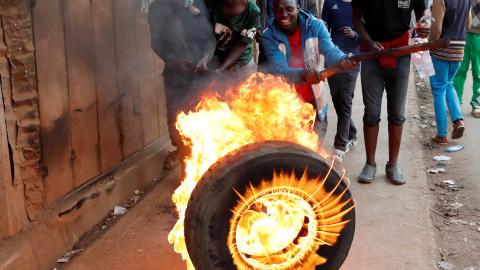 At least four killed in post-election violence in Kenya