Mutineers who held a major road into Ivory Coast's second city of Bouake rejected a proposed deal on Monday amid a four-day military revolt over a pay dispute.

Renegade soldiers in Ivory Coast on Monday rejected a proposed deal to end their mutiny over unpaid bonuses just minutes after the defence minister announced on state-owned television that an agreement had been reached.

Defence Minister Alain-Richard Donwahi said on state television late on Monday, "To end the stalemate and avoid any more bereavement of families, the army chief of staff held talks with the soldiers on Sunday and Monday ... The talks have resulted in an arrangement to end the crisis."

But two spokesmen for the mutineers confirmed that the government's proposal had been rejected.

"They proposed 5 million CFA francs ($8,356) to be paid tomorrow (to each soldier). But we want 7 million to be paid in one payment and immediately," said Sergeant Seydou Kone, one of the spokesmen.

Another mutineer spokesman in Bouake, Sergeant Cisse, said the soldiers would return to barracks "once the 7 million is deposited in our accounts."

TRT World spoke to Tamasin Ford to get the latest on the unrest.

Control over the second biggest city

President Alassane Ouattara's government has been trying to restore order for four days after 8,400 mutineers took control of the second-biggest city, Bouake and spread their revolt to cities and towns across the country. More than 200 commercial trucks were stranded on the roadside after mutinous soldiers sealed off the southern entrance to Bouake.

Heavy gunfire on Monday paralysed much of Abidjan, the commercial capital, and the western port city of San Pedro, echoing another mutiny earlier in the year.

The government paid the mutineers - most of them former rebels who helped Ouattara to power - 5 million CFA francs ($8,400) each to end an uprising in January. But it has struggled to keep a promise of a further payment of 7 million CFA francs amid a revenue crunch caused by a collapse in cocoa prices.

Ivory Coast is the world's largest producer of cocoa and London futures climbed to a five-week high on Monday due to the unrest.

Authorities earlier on Monday said they would maintain a firm line with the mutiny. There were no negotiations under way, according to government spokesman Bruno Kone, though lines of communication remained open.

The head of the army said on Sunday that a military operation had been launched to "re-establish order." Most of the large column of troops spotted on the road on Sunday evening appeared to have withdrawn.

Sporadic gunfire was heard overnight in Bouake as well as at military camps in Abidjan and intensified before dawn.

The main border crossing with neighbour Burkina Faso north of the town of Ouangolodougou was closed by the revolt, residents and the head of a transportation association said.

In signs of the economic impact of the crisis, the banking association, the APBEF, ordered banks to remain closed. Many businesses at the port in Abidjan, one of West Africa's busiest, were also shut.

"All businesses are closed here in Daloa. The banks are closed and so are the cocoa buying businesses," said Aka Marcel, a farmer cooperative manager in Daloa.

A spokesperson for the mutineers denied rumours of clashes with government troops in Bouake and said the renegade soldiers were firing in the air to dissuade any government advance. ($1 = 598.3600 CFA francs) 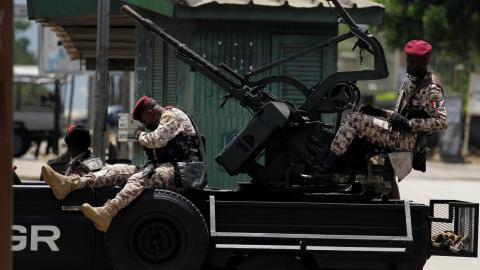 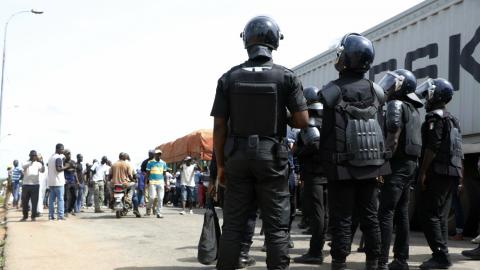