Challenger Ebrahim Raisi accused Iran's incumbent president of using state resources in his recent re-election, but the Guardian Council dismissed this claim and held the election result to be valid.

"The Guardian Council confirmed today in a letter the results of the 12th presidential election in Iran," Salman Samani, the spokesman of the interior ministry, was quoted as saying by the state media.

Rouhani easily secured reelection for a second term in the May 19 vote, winning more than 57 percent of the vote. His main challenger, conservative judge Ebrahim Raisi, received 38 percent.

He also protested against the voting procedure, accusing the interior ministry of not sending enough ballot papers to cities and villages where he had the most support.

The ministry has denied the allegations, saying that long queues affected all cities and millions of people could not cast their votes despite standing in line for hours.

"Some reports on violations were not valid, and some were referred to the judiciary," Guardian Council spokesman Abbas Ali Kadkhodaei told state television.

The Guardian Council's announcement came as no surprise as its influential chairman, Ahmad Jannati, said last week that he could confirm the validity of the election despite violations.

Protests against the presidential election results in 2009 rocked Tehran and other cities for months, marking the biggest challenge to the Iranian authorities in the last two decades.

The Supreme Leader Ayatollah Ali Khamenei has since warned candidates against questioning the results, saying it would "serve the interests of the enemies" of the Islamic Republic. 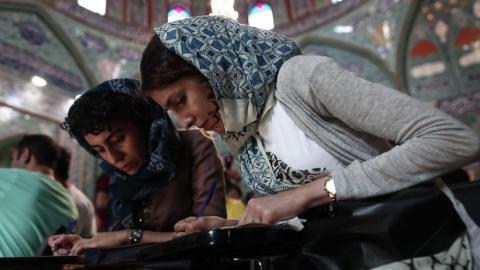