Russia's defence ministry says the YPG-dominated SDF on May 27 agreed with Daesh's leaders to open a southern corridor for Daesh terrorists operating in Raqqa to leave the city and head towards Palmyra.

Russian Foreign Minister Sergey Lavrov said the US-backed Syrian Democratic Forces (SDF) in northern Syria struck a deal with Daesh, offering it a safe corridor out of Raqqa, the de facto capital of the terrorist group, according to a report by Russia's TASS news agency.

The city has been subjected to intense air strikes in recent days, with the US-backed SDF reaching the its northern and eastern gates.

The Russian defence ministry said however that the YPG-dominated SDF had halted their offensive, leaving gaps on Raqqa's southern border, allowing Daesh to leave the city and regroup further south in Palmyra.

Lavrov added the situation showed "gaps in coordination between all those who are fighting terrorism in Syria," voicing hope that the US-led coalition would not allow Daesh to escape from its last major stronghold in Syria.

The SDF has denied the reports that it agreed on an evacuation deal with Daesh. But Moscow rejected the denial.

"Our Defence Ministry confirms this information. It relied on authentic data. Moreover, soon after this information was made public, IS [Daesh] militants really exited Raqqa and moved towards Palmyra," Lavrov said.

"The Russian military spotted the movement and struck the convoy so it never reached Palmyra," he continued.

The news comes as the US started distributing arms to the YPG early this week, after President Trump's announcement in May his decision to arm the group.

Turkey strongly condemned the US move as a decision to arm terrorists.

The YPG is the military wing of the PYD, a Syrian affiliate of the PKK. Turkey, the US and the EU list the PKK as a terrorist organisation. 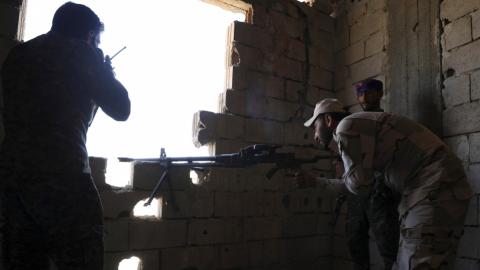