Sarin: What we know about the chemical used in the Idlib attack

The victims of the Idlib attack that killed at least 100 people, including many children, were exposed to sarin gas, autopsies have revealed. What is sarin and where has it been used as a weapon before?

1. Sarin was discovered accidently by German scientists in pursuit of stronger pesticides

Gerhard Schrader and his team of scientists were working on developing pest-control in 1938 at the German chemical company IG Farben, when they accidently discovered "substance 146". They sprayed it over some insects and the results were shocking. It caused substantial damage to the pests' nervous systems and they died instantly.

During the experiments, Dr Schrader and his team accidentally came in contact with the substance and they were left crippled for a month.

2. Sarin is highly toxic and can cause death within minutes

The World Health organisation says sarin is extremely lethal and "26 times" deadlier than cyanide. In its purest form it is colourless and tasteless, making it difficult to detect.

Sarin can be inhaled following its release into the air and has a drastic effect on human body, especially the nervous system. It acts as an "off-switch" for muscles and glands, blocking an enzyme, acetylcholinesterase, that is needed for the normal functioning of the nervous system.

With literally no control over their movements, the victim's blood pressure drops, vision blurs and pupils shrink. The chest becomes tight, making it difficult to breathe, lungs fill with fluid, and the mouth starts to foam, often with traces of blood. They also experience severe headaches, nausea and terrible body spasms. A person can die of asphyxiation within minutes.

The commonly available medicine for nerve agents like sarin is atropine sulphate. It eases the effects of cramping and irregular heart rate, and normalises breathing by opening up the airways and drying secretions.

As the chemical can also be absorbed through the skin, rescue workers at the site of the Idlib attack were seen pulling clothes off the victims and spraying them with water.

3. Sarin has been used as a chemical weapon before

The first confirmed sarin gas attack goes back to 1988, when in Iraq, some 5,000 Kurds were killed in the northern village of Halabja. Iraqi warplanes dropped chemical bombs on the city and all roads leading to it.

And sarin gas has been used in the Syrian conflict before. UN authorities found that rockets laced with the nerve agents were dropped in Ghouta, near Damascus, on August 21, 2013. The US government's finding on the attack put the death toll at 1,429 dead, including 426 children.

4. Sarin is banned under international law but Syria still has stockpiles of it.

Like all other chemical weapons, sarin is banned. It belongs to the category of "weapons of mass destruction".

The Organisation for the Prohibition of Chemical Weapons (OPCW), classifies sarin under Schedule 1, a category reserved for lethal chemicals. As per the OPCW treaty, signatory countries are required to stop manufacturing and eliminate their chemical weapons.

Even though Syria was the 190th country to join the convention, an inquiry by the UN chemical weapons inspectors revealed that surface-to-surface sarin gas rockets were fired on Damascus in August 2013. 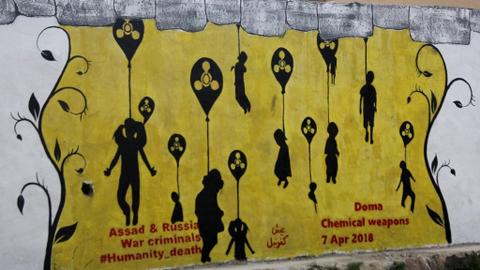