Scores trapped, at least 21 dead in Iran coal mine explosion

About 500 people work at Zemestan-Yurt coal mine in northeastern Iran, and over 80 are believed to be trapped inside, local media reports.

At least 21 coal miners are dead and 80 thought to be trapped 1,800 metres under a collapsed mine in northeastern Iran on Wednesday, Iranian media said.

The mine in Golestan province collapsed when trapped methane gas exploded as workers tried to jump-start a locomotive engine, according to reports.

"Forty workers are trapped in one part of the mine and another 30 to 40 are trapped in another part," Fars and ISNA news agencies quoted the head of Iran's emergency services, Pir Hossein Kolivand, as saying. However, this figure was later updated to 80 by news agencies.

Hurdles to the rescue operation

"Work to remove the rubble and drilling for a side tunnel has begun to access the trapped workers in the Zemestan Yort mine," the official said.

The mine employs 500 workers and the explosion happened during a change of shift, state media said.

Emergency teams and sniffer dogs have been dispatched to the mine, and work to remove the rubble has begun. 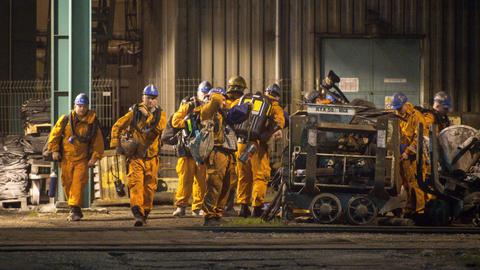