Daesh ramps up counter-attacks after getting squeezed in Raqqa

Syrian Observatory for Human Rights says at least 21 civilians – including eight children from a single family – were killed in "intensifying air strikes by the (US-led) coalition."

As Daesh steadily loses chunks of its Syrian bastion Raqqa to a US-backed force, the group is ramping up the ferocity of its counter-attacks.

The Syrian Democratic Forces (SDF) announced it "final assault" on Raqqa in early June and has advanced in a pincer-like motion towards the heart of the city.

The SDF is an alliance that was formed in 2015 and is dominated by the YPG.

The YPG is the armed wing of the PYD, what Turkey considers to be the Syrian affiliate of the PKK, which is listed as a terrorist group by the US, Turkey and Europe. Despite its terrorist links, the US insists the YPG is a valuable partner in the fight against Daesh in northern Syria.

The alliance's Arab and Kurdish fighters now hold half of Raqqa, but as they tighten the noose around Daesh, the group appears to be lashing out, according to SDF commander Davram Dersem.

To defend Raqqa, Daesh has deployed a barrage of car bombs, suicide bombers, weaponised drones, snipers, and mines scattered across the city.

"They're cornered like a wounded animal. Raqqa is their main stronghold – they're not going to abandon it easily," Dersem said.

After Daesh captured Raqqa in 2014, the group transformed the city into a symbol of its most macabre practices, including public beheadings.

Raqqa was also thought to have been used as a hub for planning attacks overseas.

Now, much of it has been destroyed by the fierce fighting and US-led air strikes. Roofs have collapsed and streets are littered with rubble, metal, and glass.

The intensifying fight for Raqqa has also forced tens of thousands of its residents to flee, dodging sniper fire, mines, and even US-led coalition air strikes.

On Friday, the Syrian Observatory for Human Rights said at least 21 civilians – including eight children from a single family – had been killed in "intensifying air strikes by the coalition" over the previous 24 hours.

The Britain-based monitor says more than 300 civilians including dozens of children have died since the SDF first broke into Raqqa.

Another 467 Daesh terrorists and 219 SDF militants have also been killed in the fighting.

The Syrian conflict began in 2011 after a crackdown on anti-regime and pro-democracy protests. The war has claimed over 400,000 lives and triggered one of the world's worst humanitarian crises in recent history. 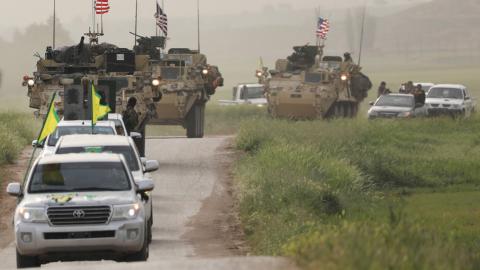 US sends arms to YPG in northern Syria