The purge of Algeria's military leadership continues unchecked as many are driven to wonder whether the latest moves come from Algeria's absent president or his brother.

In recent months, political developments in Algeria - namely, important changes among top military officials and calls for a military-backed political “transition” - have converged around the role of the army.

In late August, four of Algeria's six regional military commanders were dismissed, a move that came after the sacking of the military police chief and five of the gendarmerie’s six regional commanders.

Bouteflika has rarely appeared publicly since he suffered a stroke in 2013—which confined him to a wheelchair and influenced his ability to speak—but did not keep him from running for a fourth term in 2014 and winning without an electoral campaign.

President Abdelaziz Bouteflika, 81, has been in power since 1999.

The travel ban affects some of the top brass in Algeria:

The latest firings took place after Major General Saeed Bay, former commander of the Second Military Region, escaped the country with his family for France on September 11 2018, despite a travel restriction.

The firings also coincide with a major narco-political scandal that shook the nation with the seizure of 701 kilograms of cocaine in the western port of Oran, which implicated military and police leadership.

Algeria’s political decision-making remains opaque however, given that the ousting of Abdelghani Hamel, police chief and formerly part of the presidential clique was followed by the arrest of Major General Menad Nouba eight days later, who had been responsible for arresting him initially.

Mohsen Abdelmoumen, dissident political analyst claims that Said Bouteflika, brother of President Abdelaziz Bouteflika is continuing his brother’s work to dismantle the intelligence apparatus and consolidate presidential power, while playing “a Machiavellian game to remove any opposition that may stand in the way of business interests of the actual ruling power.”

Lahiani Otman, an Algerian investigative journalist, states, “In recent years, the rise of the finance cartel run by commerical barons, the deep state, and the army reached its height.”

To add to the confusion, in mid-July, the Movement of Society for Peace (MSP, Algeria's Islamic party) appealed to the chief of staff of the Algerian Army Army (ANP) and deputy minister of defence, Lieutenant General Ahmed Gaid Salah, to help "resolve the country's crisis" and  make way for a "democratic transition".

This has been criticised widely, given the army’s coup d’etat against the Islamic coalition victory in 1993, triggering a bloody civil war throughout the country that is still referred to as “The Black Decade”.

“Nearly 80 per cent of the security and military leaders have been ousted, and four leaders of the six military regions in the country have been involved,” says founder of the opposition “Rashad” movement, Mohamed Larbi Zitout.

“It is true that these changes are carried out by the army commander Lieutenant General Gaid Salah, but he is carrying out the orders of Said Bouteflika, brother of the President and his allies, in preparation for the nomination of President Abdelaziz Bouteflika for the fifth term next spring,” he explains.

For Zitout, “the future presidential elections in Algeria is heavily influenced by French and American interests. Zitout currently resides in exile in London, and stresses that even the current army commander, Lieutenant General Gaid Salah, who has been a loyalist to President Bouteflika’s bid for a fifth presidential term “may not continue in this position to the end.”

It is difficult to see where this will lead he says, while noting that it is possible for Gaid Salah to “mount a silent coup” against Said Bouteflika’s inner circle with “coordination from Paris and Washington.”

Karim Moulay, Algerian security expert in exile spoke out on the recent developments, and stated that the changes have been underway for several months, and are coordinated between Said Bouteflika, the current president’s brother and the military leadership.

“The security measures related to the dismissal of the majority of the military and security leaders, are made under the presidency’s recommendation as well as the approval of Paris, which is part of the creation of the climate of the upcoming presidential elections,” he states.

"No one is immune," says political sociologist Nasser Djabi, "even the all-powerful."

To prove his point, he points to the arrest of one of Algeria's most powerful figures in 2016, intelligence chief Gen. Mediene, known as ‘The God of Algeria’ or 'Toufik', after 25 years as its undisputed leader.

Gen. Mediene was trained by the Soviet KGB in the 1960s, and is said to have been one of the longest-serving secret service heads in the world.

Following his arrest, President Bouteflika went on to dismantle the Department of Intelligence and Security (DRS) formerly headed by ‘The God of Algeria’ that had grown into a sprawling secret force after 25 years of growth.

Bouteflika replaced the DRS with a new body loyal to him called the CSS, led by a retired general.

Gen. 'Toufik' Mediene, was a shadowy figure who never appeared in media or spoke in public, having led the “dirty war” throughout the 1990s following the military’s coup d’etat against the Islamic Salvation Front (FIS) which won elections in a landslide victory.

Opposition parties claim Mr. Mediene was involved in Bouteflika’s fourth term victory in April 2014 elections. Despite spending months in a hospital after suffering a stroke in 2013 and never appearing publicly or delivering a single speech. Bouteflika won 81 percent of the vote.

The changes to the Algerian national army over the past two decades along with its ambition to strengthen its structure, support Bouteflika’s public image as a civilian president who has successfully kept the army out of politics.

“There is a ferocious struggle today concerning succession,” says Omar Belhouchet, the publisher of El-Watan.

Bouteflika’s effectiveness as a ruler has been called into question by the Group 19, a collection of well-known figures who publicly demanded an audience with the president, to which no response was received.

'Group 19' include national heroes, senior politicians, and public figures. Louisa Hanoune, former minister and a member of group 19, has directly accused a shadowy group of oligarchs and ministers of manipulating the president, stating that no-one meets Bouteflika aside from his brother and a select chosen few.

Ali Benflis, former prime minister who competed against Bouteflika in the last presidential election, claims the president’s poor health left a “vacuum of power” that allowed for a group around him to seize control in a ‘soft coup’.

“Extraconstitutional forces have seized powers, outside the Constitution, from he who is charged with the presidency,” he states.

Algeria has long been run by a shadowy political collective —referred to as “le Pouvoir,” or “the Power” by Algerians, where decisions are reached behind the scenes through a system of consensus. 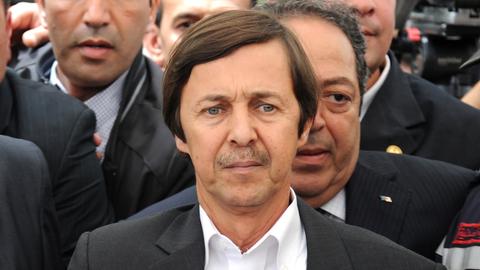