Turkey's plans in Idlib and Afrin

Turkey is discussing a possible operation on YPG-held Afrin, Russian-backed regime forces fighting against Turkish-backed opposition and advancing in Idlib, despite a de-escalation agreement.

Now that Daesh has been mostly defeated from urban areas in Syria, the fighting has shifted to Idlib, one of the last opposition-held urban territories. Containing both moderate groups and Hayat Tahrir al Sham (HTS), Idlib was chosen to be one of the de-escalation zones, in an agreement by Russia, Iran and Turkey during the Astana peace talks. HTS, formerly linked to al Qaeda, has been designated as a terrorist group by Turkey, Russia and Iran. It is the only rebel group in Idlib which is not protected under the de-escalation agreement. But now, both Iranian-backed militias and Russian-backed Syrian regime forces are attacking moderate groups positions in Idlib. Accusing Russia of taking on moderate groups under the cover of clearing Idlib from HTS, Turkey continues its support for the moderates.

And it’s not the only disagreement between the parties involved in the Syrian war. Angered by Russian attacks on the the groups in Idlib, and Moscow's lack of support in Ankara's fight against the YPG along its borders, Turkey is now planning an operation on YPG-held Afrin in Syria.

The Russian-backed Syrian regime has warned Turkey that if it attacks Afrin, it will face reprisals. But for Turkey to start an air operation on Afrin, Russia would have to be the one to open Syrian air space for the Turkish jets.

Turkey's Defence Minister Nurettin Canikli, in an interview with a Turkish news channel on Friday, said that the regime cannot act against Turkey without any help from Russia:

Is the structure of alliances shifting?

For Huseyin Alptekin, Assistant Professor of Political Science and International Relations at Istanbul Sehir University, the disagreement between the two important guarantors of the Astana talks—which Russia, Turkey and Iran have been holding for more than a year—doesn’t mean a shift in alliances, at least for now.

“Russia is actively engaging in these attacks against rebel forces in Idlib. It's a change, not a structural change in alliances, but rather an operational change,” he says.

“It may or may not change the alliance structure but we don't have enough data to talk about such a radical change in terms of alliances.”

Although they are supporting the two opposing sides of the Syrian war, Russia and Turkey became partners in late 2016, before the once opposition-held Aleppo fell at the hands of Syrian regime. When the regime siege turned into a humanitarian crisis in the city, Turkey and Russia agreed on the safe evacuation of civilians and opposition members in Aleppo.

Alptekin says, Russia-Turkey relations have been a “give and take” situation, even though not agreeing on certain issues.

“Turkey made a deal with Russia on the peaceful evacuation of Aleppo and in return, Turkey’s intervention in Jarablus-Marea-Azaz triangle. Again there were problems there because the Aleppo initiative wasn't quite peaceful, even the Russian air forces caused fewer casualties there.”

US-Turkey tensions on support for the YPG

The moderates in the country were also supported by the US since the beginning of the war. This support led the US to becoming partners with Turkey in Syria. But the US’ support for them decreased when it began supporting the PKK’s Syrian affiliate, the YPG, in 2014. And then in 2015, the US founded the YPG-dominated Syrian Democratic Forces (SDF) to fight against Daesh. The PKK is listed as a terrorist organisation by Turkey, the US and the European Union, and has been fighting the Turkish state for more than 30 years.

The YPG currently controls nearly one-fourth of Syria, including the Manbij region, a move that has angered Turkey. For this reason, Turkey's operations are not limited to Afrin, but will also include Manbij.

Since 2014, the US has claimed that its support for the YPG was conditional and temporary—only until the defeat of Daesh. Indeed, the battle of Deir Ezzor, one of the last enclaves where Daesh exists, is very close to an end. Despite Ankara's calls for ending the support, on January 13, the US announced its backing of a 30,000-strong army consisting of YPG militants, to protect YPG-held territory along Syria’s northeast border with Turkey.

Russian relations with the YPG

US support for the YPG doesn't include Afrin, but only for the northeast of the country. In Afrin, there are regime forces and Russian officers alongside YPG militants.

Turkey has been consistently arguing that it will hit Afrin unless it separates from the PKK—but it never started a wide-range operation.

“The only reason why Turkey hasn't hit Afrin so far is the lack of hundred percent agreement between Turkey and Russia. But there is no way of Turkey stepping back on that issue to negotiate with Russia, Turkey's decision is quite clear,” Alptekin says.

Indeed, no official statement from Russia shows that it will support the operation in Afrin. Turkish Presidential Spokesman Ibrahim Kalin said on Thursday, “Turkey will take measures for its national security without seeking permission from anyone.”

"The decisions and stances of the countries which have an influence on the ground in Syria is of course very crucial for our operation. For us to be more successful, our policies with those countries should be consistent. But at the end, this operation is going to take place. Any moves that will try to stop us will never be able to make us give up. But our talks with Russia will continue."

But now it’s a question of how Turkey will proceed with its operation in Afrin, if Russia refuses to open its air space.

Alptekin says, “Russia probably will request something in return regarding Idlib.”

Who is fighting the HTS in Idlib?

In its official statements, Russia said the purpose of its operations along with Syrian regime forces in Idlib, was to take down HTS, which is currently controlling less than half of the rebel-held territories. Although part of its air strikes hit HTS areas, the ground forces entered the city from the southeast, and moved through the opposition-held al Duhr airport. The regime is also very close to the HTS-held areas in southwest Idlib. But there is no visible movement towards the HTS areas, instead, the Russian-backed regime's gains in Idlib have been only in Turkey-backed moderate groups' areas.

Russia expected Turkey to fight against HTS with military force after they agreed to make Idlib a de-escalation zone, in Astana in September. But Turkey followed a less dangerous path, bringing together moderate opposition groups against HTS and reducing its influence in the city. As a part of the agreement, Turkey set up four military monitoring points to the north of Idlib, bordering with Afrin.

“Turkey is not starting a war with radical groups in Idlib. Because it's not Turkey's priority right now,” Alptekin says.

“It's very costly for Turkey to take the full initiative to get rid of radical groups in Idlib. Military operation will cost Turkish security forces, but it will also be damaging on a much bigger scale in terms of the urban warfare and casualties, migration flow, and further stabilisation efforts will be more difficult centered around Idlib.”

“Turkey will try to make a deal with Russia so Russia did not make it harder for Turkey's operation in Afrin,” Alptekin says.

“Maybe, Russia will ask Turkey not only to survey but to continue its reconnaissance mission in Idlib, but also to take full control of the city and to get to the radical forces there by using Turkey's hard and soft power.” 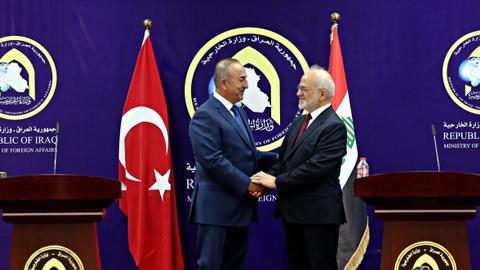