An aid convoy was struck while traveling to Urm al-Kubra in Aleppo province, hours after the Syrian regime declared a week long truce to be over.

"As an immediate security measure, other convoy movements in Syria have been suspended for the time being pending further assessment of the security sitaution," he told a briefing, adding that the UN had recently received permission from the Syrian regime to deliver aid to all besieged areas in the country.

The air strike on the convoy, which was travelling to the hard-to-reach town of Urm al-Kubra in Aleppo province, came hours after the Syrian regime declared an end to a week-long ceasefire.

Twelve Red Crescent volunteers and drivers were killed in the air strike according to the Syrian Observatory for Human Rights. The Observatory was unable to confirm if the planes responsible were Syrian or Russian.

Russia's Defence Ministry spokesman Igor Konashenkov said in comments read on Russian state-run Rossiya 24 television channel on Tuesday that neither the Russian military nor the Syrian regime were involved in the air strikes.

The UN and Syrian Arab Red Crescent humanitarian mission had sought to take advantage of the ceasefire, which collapsed on Monday night as shells and bombs rained down on Aleppo city and the surrounding province.

According to the Observatory, a total of 36 people had died in the violence across the battleground region. An AFP correspondent inside Aleppo city reported almost non-stop bombardment and constant sirens.

This is said to be the UN/Syrian Red Crescent aid convoy after it was bombed in Aleppo tonight. Ugh. pic.twitter.com/945ZfM7HiB

"Our outrage at this attack is enormous ... the convoy was the outcome of a long process of permission and preparations to assist isolated civilians," de Mistura said, in a statement emailed to Reuters by his spokeswoman in Geneva.

The Syrian regime announced the end to the truce earlier Monday, accusing rebels of more than 300 violations and failing to "commit to a single element" of the US-Russia deal.

The ceasefire, which came into force on September 12, saw an initial drop in fighting but violence began to escalate late last week and the deal came under severe strain over the weekend.

"Let me be clear: if this callous attack is found to be a deliberate targeting of humanitarians, it would amount to a war crime," he said.

The aid convoys had been arriving regularly from Turkey and their contents were mostly supplied by various regional and international charities.

The United Nations had said earlier on Monday that aid including wheat flour and health supplies for 78,000 people was to be delivered to Urm al-Kubra.

The United Nations did not confirm the casualties cited by the Syrian Observatory for Human Rights and said they were investigating the reports.

The Observatory reported 35 strikes in and around Aleppo since the truce ended. 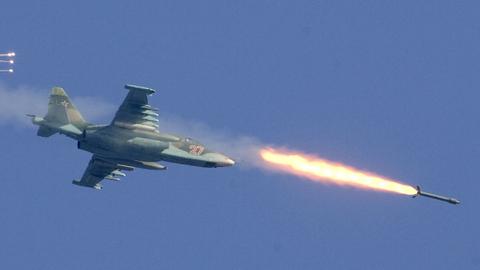