General Ali Mohammed al Mohannadi, who is heading the investigation into the hacking, told a news conference the "hacking" was undertaken "from two sites in the Emirates."

Qatar on Thursday accused the UAE of being behind the "hacking" of its national news agency that triggered one of the worst Gulf crises in years.

The UAE, Saudi Arabia, Bahrain and Egypt severed diplomatic ties with Qatar on June 5 and imposed a slew of sanctions on the emirate, including the closure of its only land border.

The remarks, denied by Doha, covered sensitive political subjects such as Iran, Hamas, Israel and the United States.

Qatar said its neighbours were behind the alleged hacking, but on Thursday the head of an investigation pointed the finger of blame at the UAE.

General Ali Mohammed al Mohannadi told a news conference the "hacking" was undertaken "from two sites in the Emirates."

"The hacker took control of the agency's network, stole the accounts on its electronic site and uploaded fake information," Mohannadi said.

The deputy head of Qatar's cybersecurity department, Othmane Salem al Hamoud, told reporters that the alleged hacker "had found a flaw in the news agency's network which was shared with another individual on Skype."

"This individual then entered this breach in order to control the QNA network," he said.

Mohannadi said the results of the investigation were submitted to the state prosecutor who is expected to take "the appropriate measures." He did not elaborate.

Earlier this month The Washington Post, citing US intelligence officials, reported that the UAE may have been behind the hack.

But the report was dismissed as "purely not true" by the UAE state minister for foreign affairs, Anwar Gargash.

Qatar has said FBI agents were helping Doha investigate the source of the alleged hack. 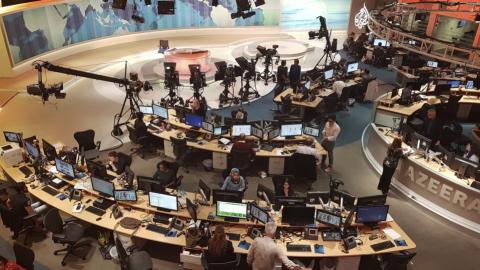