The United Nations cultural heritage agency UNESCO said on Wednesday that the ancient Syrian city of Palmyra had suffered significant damage carried out by DAESH, but that the archaeological site retains much of its authenticity.

UNESCO sent experts to the world heritage site to conduct research on the damage caused by the DAESH terrorist group, which held the city for nearly a year before it was retaken by regime leader Bashar al Assad's forces last month.

Escorted by UN security, the mission inspected both the Palmyra museum and the archaeological site.

"They took stock of considerable damage to the museum where they found that most of those statues and sarcophagi that were too large to be removed for safekeeping were defaced, smashed, their heads severed, their fragments left lying on the ground," UNESCO said in a statement.

At the archaeological site, the experts noted that parts of the grand colonnade -- an ancient avenue -- and agora courtyard were intact.

"They observed the destruction of the triumphal arch and Temple of Baal Shamin, which was smashed to smithereens," said the statement.

The experts observed a minute of silence in memory of victims murdered by DAESH at the Roman Amphitheatre - which was used for killing by the terrorists.

The remains of the Arch of Triumph of Palmyra are seen in March 2016 after it was destroyed by DAESH terrorist group during their 10-month occupation of the ancient Syrian city.

According to the statement, some sites had to be observed from a distance since de-mining operations had not been completed.

"The mission considered that despite the destruction of several iconic edifices, the archaeological site of Palmyra retains a large part of its integrity and authenticity."

UNESCO will deliver its full report on the site at the world heritage committee's annual meeting in July in Turkey, and will send another mission to examine Syrian heritage sites in greater detail.

Palmyra, northeast of Damascus, contains the monumental ruins of a great city that was once a crucial hub for trade and culture.

Palmyra was a key tourist destination before the Syrian conflict broke out in March 2011. 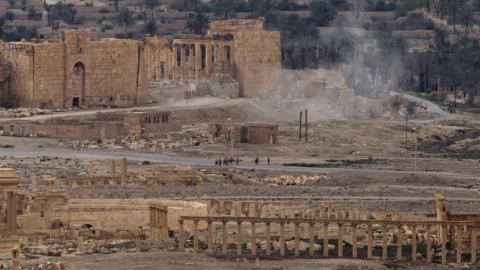