More than 80 Daesh fighters were killed when US B-2 stealth bombers and drones struck two Daesh camps southwest of Libya's Sirte.

US B-2 bombers carried out air strikes against Daesh camps southwest of Libyan city of Sirte, on Wednesday night, killing more than 80 fighters, two US defence officials said on Thursday.

"This was done with the cooperation" of the Government of National Accord, an official said, noting that outgoing President Barack Obama had authorised the move.

US Defence Secretary Ash Carter on Thursday said some of the terrorists were believed to be actively plotting attacks in Europe.

"We need to strike ISIL (Daesh) everywhere they show up. And that's particularly true in view of the fact that we know some of the ISIL (Daesh) operatives in Libya were involved with plotting attacks," Carter said.

The strike comes one month after the United States officially wrapped up military operations in and around Sirte, where it had conducted nearly 500 strikes.

The Pentagon at the time left open the possibility of conducting additional anti-Daesh attacks if the Libyan unity government asked for help in doing so.

"They posed a security threat to Libya, the region and US national interests," Pentagon spokesman Peter Cook said in a statement, noting that the strikes appeared to have been "successful."

"These strikes will degrade Daesh's ability to stage attacks against Libyan forces and civilians working to stabilise Sirte, and demonstrate our resolve in countering the threat posed by Daesh to Libya, the United States and our allies," Cook added.

Libya descended into chaos following the NATO-backed ousting of longtime Libyan leader Muammar Gaddafi in 2011, with rival administrations emerging and well-armed militias vying for control of its vast oil wealth. 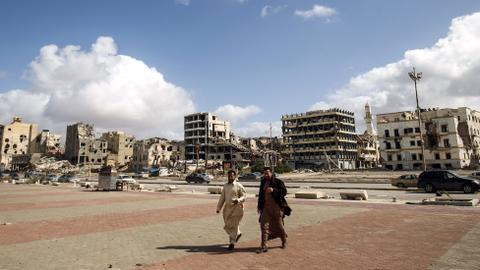 Can new elections bring an end to the Libyan war?