The Syrian Observatory for Human Rights had earlier stated that the air strike took place on Monday at dawn, hitting a building in the town of Al Mayadin that was being used as a prison.

The US-led coalition said on Tuesday it had conducted strikes on Daesh targets in the Syrian town of Al Mayadin this week and it would assess allegations that dozens of people had been killed in an air strike there on Monday.

"The removal of these facilities disrupts ISIS's [Daesh] ability to facilitate and provoke terrorist attacks against the coalition, our partner forces and in our homelands. This mission was meticulously planned and executed to reduce the risk of collateral damage and potential harm to non-combatants," he added.

Monitoring group Syrian Observatory for Human Rights earlier said that at least 57 people were killed at a jail run by Daesh in eastern Syria by air strikes carried out by the US-led coalition.

The observatory's chief Rami Abdel Rahman said the strikes hit a Daesh-held jail in Al Mayadin on Monday that killed at least 42 people who were jailed along with 15 Daesh militants.

Al Mayadin lies in the Euphrates Valley some 45 kilometres southeast of the provincial capital of Deir Ezzor.

The Britain-based monitoring group said according to its sources Daesh had paraded the bodies of the dead in the streets of the town.

Syrian regime-run TV station al-Ikhbariya cited its correspondent in Deir Ezzor as saying coalition warplanes had destroyed a building in Al Mayadin used as a prison by Daesh.

In a news bulletin flashed on screen, it said the building had been used as a prison for a "large number of civilians."

Colonel Ryan Dillon, spokesman for the US-led coalition, said: "With every single allegation we will take it and look into it."

"If we are responsible for any civilian casualties we come forth and admit it," he said.

Most of Deir Ezzor province is controlled by the militants and it has been the target of air strikes by both the coalition and the Syrian regime army and its Russian ally.

The US-led coalition said last week that it had killed Daesh's so-called top cleric Turki Binali in a May 31 strike on Al Mayadin.

Russia said earlier this month that it had killed about 180 Daesh militants, including two field commanders, in June 6 and 8 air strikes on Deir Ezzor.

Syrian regime leader Bashar al-Assad visited a Russian air base at Hmeymim in western Syria on Tuesday, his first visit to the base from which Russian jets have supported his war effort.

Photos circulated showed the regime leader in the cockpit of a Russian Sukhoi SU-35 warplane, and inspecting an armoured vehicle at the base near Latakia.

The base has been at the heart of Moscow's military effort in support of Assad since 2015, when the Russian air force began bombing insurgents who were threatening his grip on power.

Assad has also been backed in the war by Iran.

He has also been touring areas north of Damascus in recent days, a rare trip out of his seat of power in the capital, from performing Eid prayers in Hama and visiting inured regime soldiers. 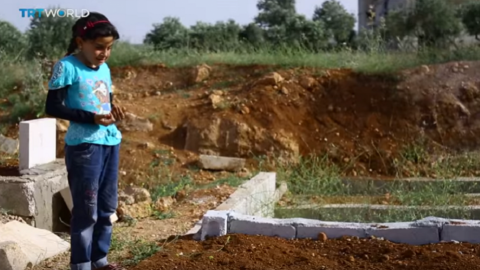 Families torn apart during the war in Syria

Dozens of Afghan civilians killed in US bombardment 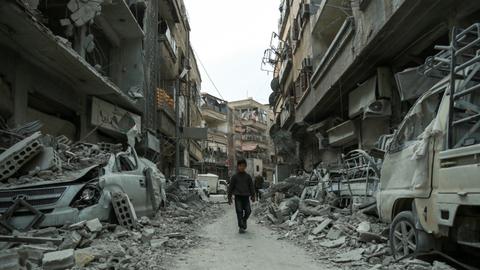 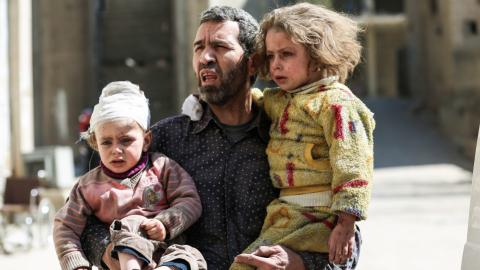