In a government effort to symbolise peace a year after Daesh was defeated in Mosul, the walls of the highly secure Green Zone are slowly being knocked down. Here are the key challenges that persist in post-Daesh Iraq.

When the US invaded Iraq in 2003 and erected barricades to block access to an area called the ‘Green Zone’ on the west bank of the Tigris River, it was widely seen as a sign that sectarian divisions were ‘set in concrete’ and the Iraqi state wasn't accessible to its citizens.

The Green Zone comprised of several western embassies and agencies affiliated to the United Nations. During the 15 years of inaccess, the locals called the barricades ‘Bremer’s walls’, referring to the US diplomat Lewis Paul Bremer, who led the US invasion of Iraq.

Iraqi officials say the partial opening of the so-called Green Zone will be permanent following a two-week long trial period. The zone was opened temporarily about three years ago.

The opening is widely perceived as the Iraqi government’s effort to portray a secure country, where the gap between state and people, caused by war, is finally narrowing. But frustrations remain in the country, with protests in the south over a lack of public services, endemic corruption, a fractured and dysfunctional parliament and the resurgent Daesh attacks along the borders.

An appointment system was set up in the Iraqi parliament following the 2003 invasion, distributing cabinet-rank ministerial positions according to the candidates' religious and ethnic backgrounds.

After the first post-Daesh parliamentary elections in May this year, Muqtada al Sadr, a populist leader who once led his followers to storm the parliamentary building in the Green Zone, emerged as winner. Sadr, who was initially known for his fiery rhetoric presenting himself as a pro-Shia leader, later re-branded himself as a reformist who spoke the language of equality and justice, particularly after Daesh wreaked havoc on the country.

However, six months after the vote, several ministerial positions are still empty due to factional rivalry among two powerful Shia groups, delaying the formation of a new government.

With Sadr supporting an independent candidate for the interior ministry post, which was long-dominated by allies of militia leader Hadi al-Amiri, the opposing politicians are backing their own candidates, causing a political deadlock.

Just as the country began rebuilding itself from scratch, Mosul was hit by a bomb in early November for the first time since the defeat of Daesh. Rampant kidnappings, assassinations and low-scale bomb attacks in the desert areas indicate the group is reviving itself.

According to a report by the UN, up to 30,000 Daesh members are still active in Iraq and Syria.

In preparation for a possible Daesh spillover from Syria into Iraq, Baghdad has deployed 30,000 troops to secure its borders. Iran backed Hashd-i Shaabi paramilitary forces, also known as Popular Mobilisation Units (PMU) led by Ameri, have become a major front in Iraq's fight against Daesh. But the group’s proxies in the Iraqi parliament are still a matter of controversy, while factionalism and sectarian politics have almost rendered the parliament defunct.

The internal disagreements could weaken Iraqi forces, as the new cloud of Daesh insurgency looms large.

Demonstrations which began in oil-rich Basra in July and swept through other southern cities haven't died down yet. The common concern among the protesters is a lack of basic services such as drinking water and a functioning power supply. Rampant corruption and unemployment make things worse.

As Baghdad was getting ready for celebrations to mark the anniversary of the defeat of Daesh, residents in Basra were seen wearing yellow vests, emulating the French 'gilet jaune' protesters.

During the fighting, non-governmental organisations reached the areas that were left devastated. But a TRT Word report states that NGOs have pulled out from previous battle hotspots around the Iraqi Euphrates River Valley, where conflict once raged, leaving locals, particularly those in the border area, in need of help.

The political rivalry which has rendered the parliament powerless is having a major impact on reconstruction efforts, with many households, bridges and key infrastructure projects still reduced to rubble following the end of the war with Daesh.

The deadlock means there is no approval of the government’s budget for 2019. Without the plan, provinces are tied up, not able to start reconstruction.

Added to this, flash floods killed several people last month and main electricity lines are still down, according to a Reuters report. 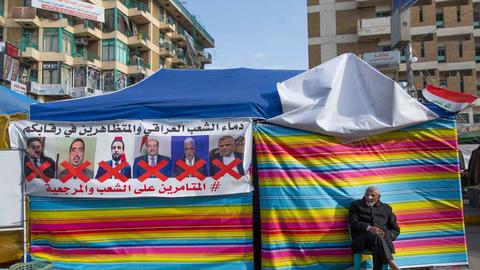