A brief and troubling history of bunker busters

The bomb that is causing immeasurable human tragedy in Syria has also been used in the past.

It's hard for Russia to deny the charge since it shares airspace control over Aleppo with the Syrian regime. But Russia is not the first countryâand perhaps won't be the lastâto use bunker busters in civilian areas.

What is a bunker buster?

It's a bomb that penetrates deep into the ground. As it explodes, destroying underground shelters and hideouts, the shock waves flatten surrounding structures — even those buildings as tall as New York's Empire State Building.

When and where can you use them in a war?

The Geneva Conventions spell out that heavy duty bombs like bunker busters could only be used in "extreme circumstance of self-defence." Dropping them in civilian neighbourhoods is strictly prohibited and perceived as inhumane.

Who else has used bunker busters, and why?

At the height of Gulf War I, US fighter jets struck an underground shelter for civilians in Iraq's Amririyah city, killing 400 people.

A decade later, the US again invaded Iraq and its bomber jets heavily pounded Baghdad with bunker busters. American officials said that they were using the weapon to hit underground command centres of the Iraqi army and bring the war to a quick end.

But a year later, Human Rights Watch contested that claim, saying the bombings "resulted in dozens of civilian casualties that the US could have prevented if it had taken additional precautions."

How do countries get away with bunker busters?

The states accused of killing civilians with such bombs come up with one common line of defence — that their enemies use civilians as human shields.

In the case of Amiririyah, the US authorities said the civilian shelter was Saddam Hussain's communications centre in disguise.

In case of Gaza, Israel said that it intended to hit Hamas leader Mohammed Deif but ended up killing his wife and their child.

The United Nations seems concerned. A top UN official said that its envoys are trying hard to broker a ceasefire with the Russian government and Syrian regime. Plus, it is also working towards holding countries accountable for their acts of aggression against civilians.

"We have asked for the Security Council to refer the situation in Syria to the International Criminal Court, so that the ICC can determine accountability," Farhan Haq, the deputy spokesperson for the Secretary-General, told TRT World.

Here is a visual explainer on how bunker busters work: 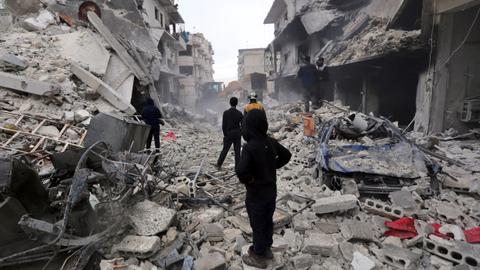