What held up the Idlib de-escalation zone?

In May, a deal determining four de-escalation zones brokered by Russia, Iran and Turkey to reduce violence in Syria was agreed. But in one of those areas, Idlib, the agreement could not be implemented.

Four months ago Russia, Iran and Turkey agreed in Astana, Kazakhstan, to set up four de-escalation zones in Syria in a bid to stop the violence in those areas, which are mainly in opposition-held areas of the country.

In three of the areas, the plan was for the most part effectively implemented. However, in the fourth zone – that covering Idlib province in northwest Syria – the plan could not be implemented.

How has the de-escalation zone plan proceeded so far?

At that meeting in Astana on May 3, the trio agreed to ban the use of any kind of weapons in four defined de-escalation zones for six months – a period which they said could later be extended.

Although the deal was brokered by Russia, Turkey and Iran, other countries, including Egypt, the US and Jordan contributed to its implementation in three other zones.

These three de-escalation zones are in Homs, Deraa, which is on the Jordanian border in southern Syria, and eastern Ghouta, which is very close to the capital city, Damascus.

Reports said the agreement did help to reduce violence in those areas although it didn’t completely stop it. The violations, though, did not cause the conflict to escalate in the three de-escalation zones – a tenuous peace has held.

For Idlib, it took two further meetings in Astana to reach a deal on details of the de-escalation plan.

The deal agreed for Idlib on September 15, followed phone calls and meetings between the foreign ministers and leaders of Russia, Iran, and Turkey.

At the September meeting in Astana the exact boundaries of the fourth de-escalation zone were determined. It would include northeast Latakia, west of Aleppo and north of Hama provinces besides Idlib.

The three countries agreed to deploy 500 observers from each country to monitor and record violations, but not many other details about the plan were determined.

Russia said its observers would be military policemen. Turkey joined Russia a week later saying that it will also deploy its troops inside Idlib as a part of the de-escalation agreement.

“The task is not easy ... With Putin we will discuss additional steps needed to be taken in order to eradicate terrorists once and for all to restore peace,” Erdogan said.

On September 19, the only hospital providing maternity services in rebel-held part of north-western Idlib was bombed along with other hospitals in the area, allegedly hit by Russian air strikes.

About 40 other air strikes were carried out by Russian and Syrian regime planes in northern Hama and adjacent southern Idlib provinces in response to an attack by rebel groups on regime-held villages.

Turkey’s foreign minister Mevlut Cavusoglu said the recent bombings in Idlib had killed civilians and moderate rebels. It violated the agreement, he added, and this would be discussed with Putin when he visited Turkey.

Russian President Vladimir Putin is due to discuss the details of the plan with Turkish President Erdogan on a working dinner on Thursday in the Turkish capital, Ankara.

Why is Idlib important?

Idlib has strategic importance for both Turkey, Iran and Russia. Idlib is one of the two opposition-held areas on the Turkish border. It has one of the few border gates that remains open on Turkish-Syria border – a security concern for Turkey.

Bordering Idlib to the north is the YPG-controlled area. Securing Idlib is important for Turkey, which wants to limit any enlargement of the areas under YPG control.

The YPG is the armed wing of the PYD, which is the Syrian affiliate of the PKK. The PKK is designated a terrorist group by Turkey, the US and the EU, and has been fighting the Turkish state for more than 30 years.

Idlib’s proximity to the corridor that links coastal Latakia with the capital Damascus and the provinces in the west where the regime has most of its power, makes it strategic for both Russia and Iran. They have been the biggest supporters of Syrian regime leader Bashar al Assad since the beginning of the civil war in Syria.

Why was Idlib different to other de-escalation areas?

In July, after clashes between different groups, Hay’at Tahrir al Sham (HTS) took control in most of the province. The group formerly calling themselves the Al Nusra Front, an affiliate of Al Qaeda.

In a bid to not be labelled a terror group, it declared that it split from Al Qaeda in July last year. But it is still considered as a terrorist group by the US, Russia, Iran, and Turkey. Unlike the Free Syrian Army (FSA), an umbrella group for other armed opposition groups, HTS was not invited to Astana and it rejected the de-escalation process.

“The local force [HTS] is so hostile to this process that it’s been impossible to implement the agreement,” according to Kyle Orton, Middle East analyst and Research Fellow with the Henry Jackson Society.

“Supporting the moderate Free Syrian Army (FSA), Idlib’s only border country, Turkey has been trying to weaken Nusra,” says Abdullah Al Mousa, a researcher who previously worked as a field officer for international organisations in Syria, in an opinion piece for the Atlantic Council.

As the Syrian regime intensified its bombings on civilian-populated areas in Idlib ahead of Putin’s visit, Assad said he would abide by the agreement but would continue to fight “terrorism” wherever it exists – a language interpreted by many as a signal for future attacks.

According to Orton, Assad uses ceasefires, and de-escalations to help his war effort.

“In May, what he wanted was a degree of calm that he could get in Idlib, as he pushed his troops into Deir Ezzor,” he says.

“So he just essentially wanted a bit of calm for time, and then carried on bombing as he wanted to but it more or less de-escalated. But as the hammer offense [Russia and Turkey] is coming, the agreement breaks down [for Assad].”

Idlib is surrounded by regime forces on the east, south and southwest; the YPG in the north and it has a border with Turkey on the northwest.

Where are the other de-escalation zones?

Second zone: This zone includes the Rastan and Talbiseh enclave in northern Homs province. More than 150,000 civilians live in this area. The de-escalation zone was only implemented on August 3.

Homs was an opposition stronghold in Syria’s civil war, but fell to government forces in 2015.

The agreement covers three rebel-held towns and dozens of villages north of Homs city, which is under government control.

Third zone: This zone covers Eastern Ghouta, the last major opposition stronghold in the northern Damascus countryside, where a little less than 700,000 people are living. This area excludes the regime-besieged area of Qaboun.

The de-escalation agreement for Eastern Ghouta was signed again with Egyptian mediation after representatives of Syrian opposition groups and the Russian military held talks in Cairo in July 23.

Russia, an ally of the Syrian regime, said it had deployed its military police in Eastern Ghouta in July to try to enforce the de-escalation zone.

Fourth zone: This zone covers the opposition-held south along Syria's border with Jordan. It includes parts of Deraa and Quneitra provinces in which about 800,000 civilians are living.

The southern de-escalation zone began functioning from July 9 as a result of agreements between Russia, the United States and Jordan. 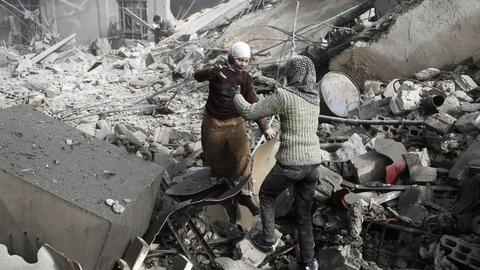