At least 134 Yemen rebels killed in recent strikes near Marib

Houthis warn they are “on the edges of” Marib as Saudi-led coalition says it targeted nine of the rebels’ military vehicles south of the city.

More than 130 Yemen rebels have been killed in Saudi-led coalition air strikes south of Marib, a flashpoint of the civil war.

Dozens of strikes were carried out in the Al Abdiya district of Marib province, targeting Yemen's Houthi rebels. Marib city is the internationally recognised government's last outpost in northern Yemen.

"We targeted nine military vehicles of the Houthi militia in Abdiya, and their losses exceeded 134 members," said a coalition statement on Tuesday carried by official Saudi media.

The Houthis warned they were "on the edges of the city", in a video statement released on Tuesday.

Rebel forces "today are on the edges of the city of Marib from several sides after defeating traitors and mercenaries... from several districts in Marib and liberating them completely," spokesperson Yahya Saree said.

The latest toll comes just a day after the coalition announced the deaths of 156 rebels in similar strikes in Al Abdiyah. The rebels rarely announce casualties in their ranks.

The Houthis renewed their campaign to capture Marib last month. The resulting clashes and air strikes have left hundreds of rebels and loyalists dead.

On Sunday, six people died in a car-bombing that targeted a convoy carrying the governor of Aden, the government's provisional seat of power. He survived the attack.

Yemen has been devastated by a seven-year war pitting the Shia rebels against the government supported by a Saudi-led military coalition.

Tens of thousands of people have been killed and millions have been displaced since the conflict flared in 2014, when the Houthis seized the capital Sanaa. 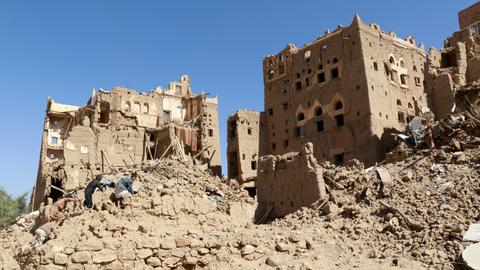