EU calls on Israeli to stop demolition of Palestinian homes

Israeli bulldozers began razing a Bedouin village near Tubas in the Jordan Valley, leaving its dozens of inhabitants homeless, half of them children.

The European Union has called on Israel to cease demolishing Palestinian homes in the occupied West Bank and lift a threat to demolish Palestinian schools, calling them "an impediment towards the two-state solution".

Israel's army stated the homes were "built illegally" in an area used for military training.

The EU statement said that half the Palestinians made homeless in the demolition were children.

"This large-scale demolition confirms once again the regrettable trend of confiscations and demolitions since the beginning of the year," it said.

Israel has also threatened to raze 52 Palestinian schools, including one in Ras Al-Teen in the West Bank that was co-funded by the EU and EU member states.

"The EU calls for the protection of children, including ensuring their right to education in a safe and secure school environment," the statement said, noting that education is a basic human right.

"The EU reiterates its call on Israel to halt all such demolitions, including of EU-funded structures, in particular in light of the humanitarian impact of the current coronavirus pandemic," it said.

READ MORE: How a Palestinian man watched his Israeli friend bulldoze his house 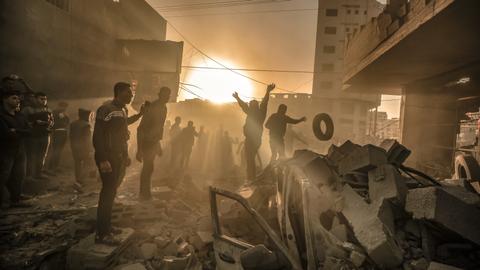 In pictures: Israeli strikes on Gaza, the aftermath