This year's Nakba Day marks 73 years since 750,000 Palestinians were forcibly expelled from their homes, turning them into the largest displaced group at the time nearly overnight.

As people around the world commemorate Nakba Day which marks the forced expulsion of over 750,000 Palestinians during the creation of Israel in 1948, Israeli air raids and artillery barrages on Gaza continue to intensify to historically unprecedented levels.

The Nakba, Arabic for catastrophe, refers to the collective traumatic event that saw 15,000 Palestinians killed and 531 Arab villages destroyed in attacks to make way for the Israeli state.

The most recent indiscriminate fire by Israel in Gaza took the lives of eight more Palestinians early Saturday, bringing the total death toll to at least 139 since the attacks began six days ago, according to Gaza’s Health Ministry.

Eight children and two women were killed by Israeli forces in the latest attack on a civilian residential building.

The only survivor was a 2-month-old baby,  according to Gazan health authorities who stated that a “massacre” was not adequate to describe what's currently unfolding there.

Protests condemning Israel's disproportionate military aggression and illegal expansion of settlements are also being held around the world in solidarity with Palestinians.

On the 73rd anniversary of the Nakba, here’s what you need to know about the the Arab-Israeli war that ended with the declaration of the state of Israel and the forced displacement of hundred of thousands of Palestinians pic.twitter.com/I4BDC80dyP

Gaza under seige
Hamas' military wing, the Izzeddin al-Qassam Brigades, announced that Ashdod and Beersheba were hit by rockets in response to the destruction of a house in the al Shati refugee camp, and to avenge Palestinians killed in the occupied West Bank.

Total fatalities in Gaza includes 38 children and 22 women, while the number of injured exceeds 990 since Monday, according to Gaza's health ministry.

Meanwhile, 11 Palestinians were killed on Friday as Israeli forces attacked unarmed demonstrators in an attempt to break up and disperse rallies in parts of the occupied West Bank.

Lebanese authorities announced that one Lebanese youth was killed when Israeli artillery fire targeted unarmed protesters along the Israeli security fence in the south of the country.

Is Zionism at the root of the violence against Palestinians spilling onto your feeds? pic.twitter.com/eD9vOuzpUP

Sheikh Jarrah
Tensions have reached all time highs throughout Palestine after the forced evictions of Palestinians in the Sheikh Jarrah neighborhood of occupied East Jerusalem, as well as vicious and unprovoked attacks on worshippers in the Al Aqsa Mosque and Damascus Gate throughout the Muslim holy month of Ramadan by Israeli forces and settlers alike.

It annexed the entire city in 1980 in a move which has never been recognised by the international community.

How Britain's pledge to establish ‘a national home for the Jewish people’ destroyed the Palestinian homeland pic.twitter.com/xmBzQKsBC4

Every year, Palestinians reaffirm their right to return to their homes and villages in historic Palestine on Nakba Day.

This year marks the 73rd anniversary of the Nakba, with uncharacteristically higher levels of anti-Palestinian violence than usual.

On May 15, 1948, some 750,000 Palestinians were expelled into refugee camps that still exist in the West Bank, Gaza, Jordan, Syria and Lebanon following the creation of the State of Israel in 1948.

READ MORE: 'Efforts to diminish Palestinians in Jerusalem was clear from an early age'

To motivate Arabs to leave their land, armed Zionist militias and gangs massacred entire villages of men, women and children to send a simple message: leave or die. In one since depopulated village, roughly 600 people were attacked by militias with over 100 Palestinians killed. The massacre was pivotal in pushing Palestinians to leave their homes, which was later cited as proof the land was without a people, and therefore ready for settling.

For hundreds of years, Jews and Arabs, lived in Palestine as citizens of the Ottoman Empire but that status quo ended in the aftermath of World War I and the establishment of the British Mandate of Palestine.

The Palestinians were to suffer further when the West Bank and Gaza fell to the Israelis during the 1967 war.

Millions of Palestinians, including those displaced with the establishment of Israel, now found themselves having to live under military occupation, as well as further Israeli expansionism in their lands.

In April of 2020, Israeli Prime Minister Benjamin Netanyahu announced his intention to annex the West Bank with the support of the US, a move widely hailed as illegal and in contravention to international law.

For many Palestinians, this is only the latest chapter in a process that began with the initial loss of their land in 1948.

According to Palestinian figures, roughly 640,000 Jewish settlers now live on 196 settlements (built with the Israeli government's approval) and more than 200 settler outposts (built without its approval) across the occupied West Bank and East Jerusalem.

Palestinians claim the entire West Bank, captured by Israel in the 1967  war, as part of a future independent state. They say the growing illegal Israeli settler population, approaching 500,000 in the West Bank, has made it increasingly difficult to achieve their dream of independence. 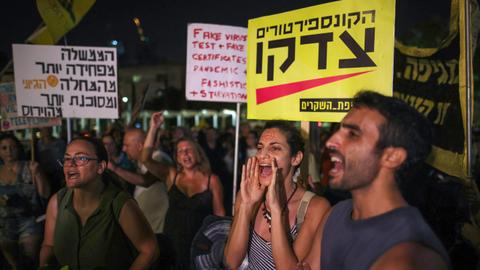