Qatar is already blocked from accessing Saudi and Emirati airspace since they implemented a 2017 blockade.

Tensions between Iran and the US are at the highest they have been in decades.

On Thursday, Iranian forces shot down an American drone, which they said had entered their airspace.

US President Donald Trump ordered strikes on Iran before calling them off again.

The US Federal Aviation Administration has barred US civilian aircraft from flying in Iranian air space in the Gulf and several airlines have also rerouted their flights.

The situation has particular significance for Qatar, which already has limited air routes in the Gulf because of Saudi-led sanctions on the state.

Since 2017, Qatar has been subject to a land, sea, and air blockade at the hands of the UAE, Saudi Arabia, and Bahrain.

Two of these states, Saudi Arabia and the UAE have blocked air traffic heading to and coming out of Qatar.

As a result, Qatar Airways has been forced to change its flight routes to avoid flying over Saudi Arabia and the UAE.

The blockade and the security situation in Iraq has forced Qatar Airways to rely heavily on Iranian airspace for its flights.

Prolonged and more intensified tensions between the US and Iran, would not bode well for Qatar given this context.

Avoiding Iranian airspace in the event of a conflict could add further pressure on airlines operating from the country, according to Aviation Analyst Alex Macheras.

“Both Saudi and UAE continue to violate their signed ICAO agreements which clearly state they must not close their airspace to a specific airline or country, meaning Qatar relies heavily on overflying Iran for both eastbound, and westbound routes.

“Iran has a large amount of airspace, but the corridor to access southern Iran could be caught up in airspace restrictions (should tensions worsen between US and Iran).“

The blockade was partially blamed for the $69m loss Qatar Airways suffered in 2018.

Added fuel costs due to longer routes caused by the blockade were one of the contributing factors for the loss.

Rerouting more flights because of tensions between Iran and the Gulf would further burden the airline and others operating in Qatar. 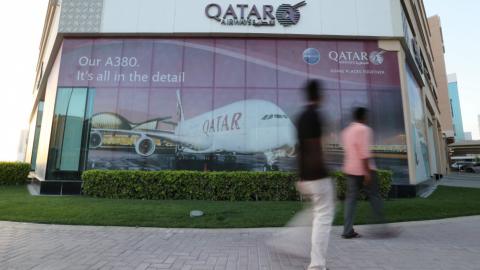