Washington's support for the YPG in arms and cash compelled Ankara to take military measures in northern Syria.

The US and the YPG have been collaborating in northern Syria since 2015, when Washington carved out the so-called Syrian Democratic Forces (SDF) to fight the growing presence of Daesh in the region.

The move did not go down well with Turkey as the YPG is the Syrian offshoot of the PKK, a terrorist group in the eyes of US, EU and Turkey.

Although the US government tried to hoodwink Turkey into thinking that the SDF was not run by the YPG, Ankara had a raft of evidence that appeared to show the opposite.

So why did the US put all its bets on a terror group that threatens its NATO ally Turkey?

"Instead of working with an independent Turkey, it seemed easier for Americans to manage the YPG, which needed money and arms," said Ozden Zeynep Oktav, a professor at Istanbul Medeniyet University. "So they boosted the YPG and used them as a war tool in the region."

Speaking to TRT World, Oktav said that ever since the Cold War major global powers avoid military deployments and use proxies to realise their foreign policy goals.

“The relationship between Turkey and the US could not return to normal, particularly after 2012 [when the US started giving nominal support to the YPG],” Oktav says.

For the US, according to Oktav, the presence of a terrorist organisation next to Turkey's border in northern Syria was a matter of great concern and yet they did nothing to address it, bringing an overwhelming diplomatic strain to Ankara-Washington ties.

Oktav said another reason for the US to fight one terror group with another was the YPG's optics. The US government perceived the terror group as a 'secular' entity, while it saw Turkey's leadership through an Islamophobic lens.

Oktav said that in the long term the US wanted to see the YPG as a fully-functional independent state to serve Israeli interests in the Middle East. "That's why the group was loaded with cash and armed heavily," she said.

As the US continued to dither on the YPG question and continued arming the group with heavy duty weaponry, Ankara couldn't stop feeling isolated. Eventually, the situation compelled Turkey to gravitate toward Russia.

Here's a breakdown of how much money and arms the US provided to the YPG.

According to Turkish security analyst Abdullah Agar, the US was instrumental in turning a rag-tag terror group into a conventional organisation by supplying it with sophisticated weapons and equipment and installing the group next to Turkish border.

US President Donald Trump was candid enough to admit the US had provided an excessive amount of weapons to the YPG. In a recent tweet, he said: "The Kurds fought with us, but were paid massive amounts of money and equipment to do so."

.....again said “NO,” thinking, as usual, that the U.S. is always the “sucker,” on NATO, on Trade, on everything. The Kurds fought with us, but were paid massive amounts of money and equipment to do so. They have been fighting Turkey for decades. I held off this fight for....

During the latest Turkish military operation in northern Syria, the YPG used RPG-7 launchers to hit a Turkish tank, and fired heavy mortars into Turkish neighbourhoods, which killed at least 17 civilians.

To contain the looming security threat, Turkey finally went ahead with the Operation Peace Spring on October 9, entering northern Syria and damaging much of the YPG's military capacity.

Security analyst Agar, however, believes that the US is unlikely to completely withdraw its support to the YPG.

Although the US and Turkey have agreed that the latter would halt its military operation and allow the YPG to pull back from border areas, the US Department of Defense has already allocated $300 million to its military project in Northern Syria.

Experts like Agar says that it's still possible that the YPG will be the main beneficiaries. 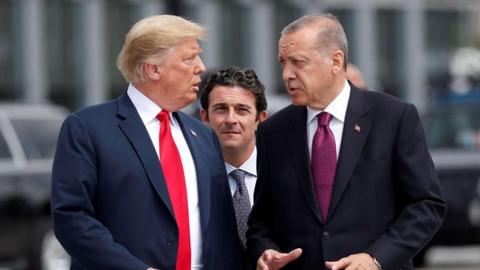