Protestors have spilled out on to the roads and clashed with police in multiple cities as anger mounts over struggling economy and indifference of the government, which is more focused on regional politics.

Protestors frustrated by Iran's strained economy gathered in the capital Tehran and another major city on Friday, for the second day of spontaneous demonstrations placing pressure on President Hassan Rouhani's government.

Around 300 protesters gathered in the western city of Kermanshah.

In Tehran, hundreds of people had protested against rising inflation a day earlier.

Protesters in Kermanshah chanted anti-government slogans such as "death or freedom" and "political prisoners should be freed."

They expressed anger over Iran's continuous meddling in other countries' affairs at cost of internal stability with slogans such as "never mind Palestine, think about us."

Some protestors damaged public property before police dispersed them.

Many angry demonstrators had protested across the country on Thursday, including the second-largest city of Mashhad, in a rare show of defiance to religious establishment that doesn't tolerate dissent.

The head of the Revolutionary Court of Mashhad, Hasan Heidari, said that 52 protesters were arrested in Mashhad over their "illegal" gathering on Thursday.

This latest wave of protests is placing new pressure on Rouhani as his signature nuclear deal with world powers remains in peril.

Videos published by reformist media group Nazar showed people chanting "Death to Rouhani" while others shouted "not Gaza, not Lebanon, my life for Iran", reflecting anger in some circles that the government is focusing too much on regional politics rather than tackling domestic problems.

One lawmaker said these protests were also rooted in the collapse of credit institutions and other financial scandals.

An uncontrolled construction boom left many banks and credit companies stuck with toxic debts, which combined with soaring inflation and the chaos caused by international sanctions, pushed many to default on their debts.

The United States has condemned the arrest of peaceful protesters in Iran and urged “all nations to publicly support the Iranian people and their demands for basic rights and an end to corruption,” the US State Department said in a statement. 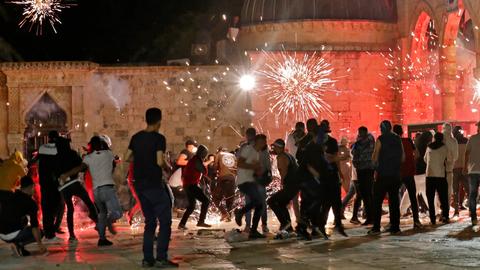