Iraqi protesters have changed their strategy for survival

They are navigating carefully, ensuring no 'vested interest' hijacks their movement through violence.

It's been a year since a major uprising broke out in Iraq against rampant corruption in government ranks, mismanagement of the economy, and rising unemployment.

A year on, public anger hasn't fully receded even though last year's protests led to the ousting of Prime Minister Adel Abdul Mahdi.

Committed to seeing their government perform along the margins of equality and development, the Iraqi youth has learned a crucial lesson from last year's protests — and that is to survive and keep the movement alive.

On October 25, the protesters marked the first anniversary of the rallies. As the day panned out, maintaining civility on the streets proved to be a tough task, as several thousand protesters, who took to the streets in Baghdad, suddenly moved to the heavily fortified Green Zone, where government offices and foreign embassies are located.

For many young protesters, the march towards the Green Zone was neither expected nor needed.  Their priority was to protest peacefully outside it, with an aim to deliver a message to the government—-that the demands that led to the toppling of Mahdi's government still have not been met.

Zaid al Hindi, a young protester originally from Karbala city, participated in Monday's demonstration in Baghdad, where he now lives.

Hindi told TRT World that the moment the rally began changing its direction and moving towards the Green Zone, he, along with his fellow protesters opposed it.

"We opposed it because we knew the militias had entered al-Khadra, an area around the embassies. They were prepared to kill anyone who entered (the Green Zone),” Hindi said.

"They (groups with vested interests) intentionally drove protesters to the Green Zone, and upon their return to Tahrir Square, these infiltrators attacked the protesters' tents. They are working toward escalating the situation until they become martyrs and the (new) government falls".

Keeping the infiltrators at bay

Dissent in Iraq comes with a heavy price, as kidnappings and assassinations allegedly carried out by Iran-backed militias, have become a common occurrence in the country, which is reeling from the economic turmoil accelerated by crashing oil prices.

The protesters are burdened with a range of problems — from keeping their demonstrations completely peaceful, to dealing with political groups with the agenda of overthrowing the new government led by Prime Minister Mustafa al Kadhimi.

They simply want to mobilise grassroots protesters, generate a nationwide debate on the issues plaguing the country, and seek accountability from the new government.

“We want to open a new page and continue weekly protests while getting ready to vote in the elections,” said Hindi.

The last year’s protests were largely organic and with no visible leader in sight. It was largely driven by the working class youth from both Shia and Sunni sects.

According to Hindi, the majority of activists want to keep the peaceful nature of the protests intact and focus on achieving positive outcomes, but ragtag groups of unknown men and a section of older activists are making things difficult on the ground.

"Since last year's protests grew organically, the older activists are trying to own it and the movement it generated. Some of them encouraged people to go to the Green Zone because it is very likely that they have some political links and they want to use the protest movement for their own benefit," he added.

“We’re trying to keep elderly and underage students away from the dangerous areas so as to protect them,” he tells TRT World.

“There are some people who claim to be demonstrators secretly calling for the overthrow of the government,” Khazraji says.

Khazraji understands that until corruption persisted and militias kept influencing politics, replacing one government with another was a pointless endeavor.

According to Khazraji, the main demands included a constitutional amendment, barring militia-backed parties from contesting elections, holding parliamentary elections under UN supervision, and punishing those who were responsible for killing protesters in last year's demonstrations.

None of those demands have been fulfilled yet, however.

While replacing Mahdi five months ago, Prime Minister Kahdhimi promised to deliver justice to those who lost their lives during the violent police and militia crackdown.

To build his trust amongst disgruntled and disillusioned Iraqis, he presented himself as a prime minister who is sympathetic towards protesters and their requests. He also said he would reverse the police and militia crackdowns on protests.

But Kadhimi’s premiership has brought little to no change on the ground. He has too much on his plate: among his tasks are struggling to strike a balance between Iran and the US, rein in the violent militias and also tackle the oil crisis that shows no sign of recovery.

For Hani Munther, a 24-year-old protester from Babylon, the future is bleak. He has lost a close friend and wants to take the government down even at the expense of being killed or injured.

“It’s impossible for the revolution to succeed, but we protest because there is no other option. In any case, we have nothing to lose,” he tells TRT World.

He has a bachelor’s degree in physics from the University of Babylon, but he never had the chance to work in his field.

“In the country of oil and resources, I don’t have a dinar,” he says. 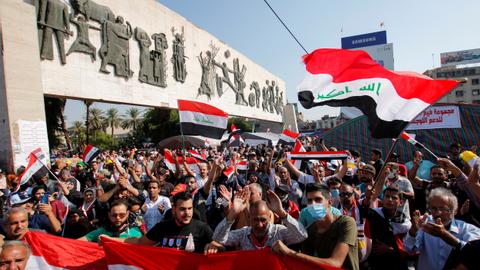 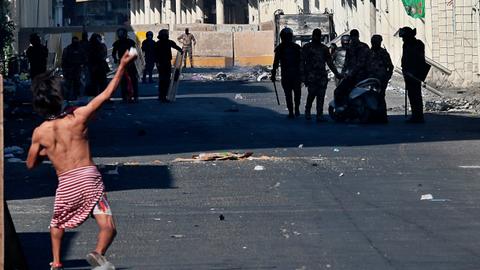