Israeli army has seized bodies of victims and arrested an injured man, according to the Palestinian official news agency Wafa.

Two Palestinians have been shot dead and a third wounded by Israeli forces near the city of Ramallah in occupied West Bank.

Israeli soldiers “shot more than 30 bullets” at a car during an early morning raid near the Jalazone refugee camp, the Palestinian official news agency Wafa reported on Monday.

The two men killed were identified as Basel Basbous, 19, and Khaled Anbar, 22, both residents of Jalazone.

Rafat Salameh, a 19-year-old from the town of Bir Zeit, was injured in the shooting.

Israeli soldiers took away the bodies of the two men and arrested the injured Palestinian, the report said.

The Palestinian Health Ministry confirmed that “two citizens were martyred after the (Israeli) occupation opened fire on them near Jalazone.”

A Palestinian Foreign Ministry statement condemned what it termed “a war crime and a crime against humanity,” saying that the Israeli government was “fully and directly responsible” for the killings, Wafa reported. 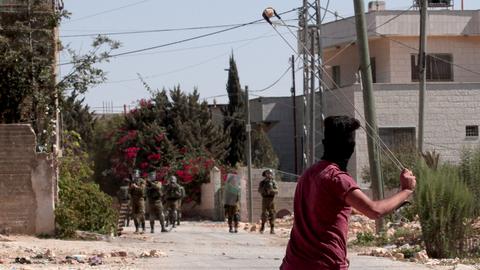