Wednesday's rallies were called to mark Nakba Day, what Palestinians term the catastrophe that befell them after Israel's invasion in 1948, when hundreds of thousands fled or were expelled from lands in what is now Israel.

Israeli troops wounded nearly 50 Palestinians at the Gaza fence on Wednesday during protests to mark the 71st anniversary of the "Nakba," or catastrophe, when many Palestinians lost their homes in the fighting around Israel's creation, Gaza officials said.

The Gaza health ministry said at least 47 people were wounded, though it was not clear how many of those were hit by live ammunition or were hurt by rubber bullets or by inhaling tear gas.

The Israeli military said about 10,000 rioters and demonstrators gathered in several places along the Gaza fence.

Wednesday's rallies were called to mark Nakba Day, what Palestinians term the catastrophe that befell them at Israel's creation in 1948, when hundreds of thousands fled or were expelled from lands in what is now Israel.

'We'll get our rights back'

"Our people rise today to announce their rejection to this crime and to assert their right in Palestine, all of Palestine," Islamic Jihad leader Khader Habib said at one demonstration, referring to Israel and the territories it captured in the 1967 Middle East war.

Another protester, Jamila Mahmoud, 50, said her family had originally come from Asqlan, now the Israeli city of Ashkelon, near Gaza.

"If we don't return, maybe our children and grandchildren will do, one day we will get our rights back," Mahmoud said at the border protest site.

Palestinians also held rallies in the occupied West Bank but no major clashes with Israeli forces were immediately reported.

This year's Nakba protests were preceded by a surge in deadly cross-border fighting between Gaza militants and Israel which ended in a ceasefire on May 6.

Israeli troops have killed more than 200 Palestinians and wounded thousands in regular border protests since March 2018, according to human rights groups.

UN investigators have said the Israeli military might be guilty of war crimes for using excessive force.

Israel has said it is defending its border against attacks against its troops and infiltration attempts by gunmen.

Israel has rejected a Palestinian right of return as a threat to maintaining a Jewish majority in a country it describes as the nation-state of the Jewish people.

Frustration is growing among Palestinians as hopes fade for a two-state solution to the conflict, which would give them an independent country. 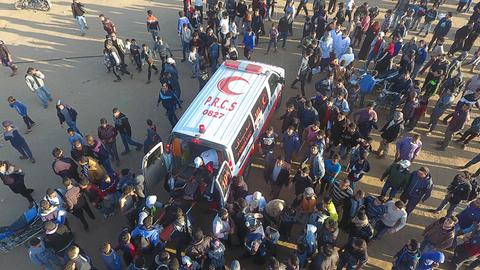