Prime Minister Benjamin Netanyahu also proposed to set up a team with others to reach the goal of removing from Syria all foreign forces on its soil and returning the foreign troops situation to what it was before the start of the civil war.

Israel's prime minister vowed on Wednesday to prevent Iran from securing a lasting presence in Syria as he visited Moscow for talks focusing on regional security.

For Benjamin Netanyahu, it's the first trip to Moscow since September's downing of a Russian warplane by Syrian forces that were responding to an Israeli air strike. The incident left 15 Russian crew dead and threatened to derail close security ties between Russia and Israel.

Russian President Vladimir Putin said at the start of Wednesday's talks that "it's very important to discuss the situation in the region and security issues."

He added that high-level consultations are essential in view of the evolving situation.

Netanyahu began the talks by reaffirming Israel's strong determination to block attempts by Iran to establish a foothold in Syria.

"The greatest threat to stability and security in the region comes from Iran and its satellites," he said. "We are determined to continue with our aggressive action against the efforts of Iran, which calls for our destruction, and against its attempts to entrench militarily in Syria."

Prime Minister Netanyahu proposed to set up a team with others to reach the goal of removing from Syria all foreign forces on its soil and returning the situation regarding foreign troops to what it was before the start of the Syrian civil war.

He said a team has been established to deal with this matter in Israel’s National Security Council.

Moscow has played a delicate diplomatic game of maintaining friendly ties with both Israel and Iran.

Last summer, Moscow struck a deal with Tehran to keep its fighters away from the Golan Heights to accommodate Israeli concerns about the Iranian presence in Syria.

Netanyahu noted that he and Putin have had 11 meetings since September 2015 and hailed "the direct, open and true way in which we maintain the relationship between Russia and Israel."

"The direct connection between us has been an essential element that has prevented risks and conflicts between our militaries, and that has contributed to regional security and stability," the Israeli leader said.

Netanyahu congratulated Putin on the military holiday Russia marked last weekend and invited him to visit Israel to attend the opening of a monument to the Nazi siege of Leningrad during World War II.

"We will never forget the role of Russia and the Red Army in the victory over the Nazis," he said.

Putin, a native of the city, accepted the offer.

Netanyahu praised "excellent bilateral relations," noting "more than one million Russian speakers who have made a great contribution to Israel, have turned into a part of us, and have made Russian culture a part of Israeli culture." 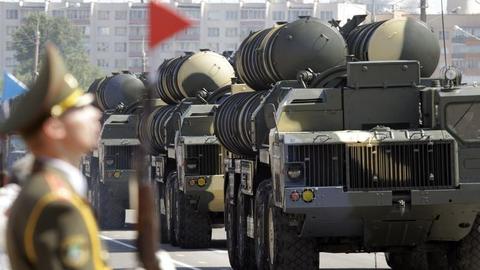