A mosque has been vandalised in a suspected "price tag" attack apparently by Israeli settlers in occupied West Bank, according to the Palestinian Authority and residents.

Attackers spray-painted anti-Arab slogans and racist graffiti on the walls of a mosque in Al Bireh city in the central West Bank, the residents said.

The Palestinian Authority said a group of Israeli settlers tried to burn down a mosque.

"The Land of Israel for the People of Israel," read part of a slogan sprayed in Hebrew on the mosque's wall, a reference to a biblical, historical and political claim to an area that includes the occupied West Bank.

A Palestinian emergency services official said a bathroom area of Al Bir and Al Thsan mosque was burned after flammable liquid was poured through a smashed window before dawn.

He said residents living near the mosque and firefighters extinguished the flames, and the mosque's prayer area was undamaged.

It appeared to be the latest case of the so-called "price tag" vandalism, which is a strategy used by militant Jewish settlers to attack Palestinians and their property in retaliation for perceived threats to Israeli settlement expansion.

"Residents were surprised during the night by a fire in the mosque and rushed to put it out," Al Bireh Mayor Azzam Ismail said, blaming "Israeli settlers."

Speaking ahead of a weekly Palestinian cabinet meeting, Prime Minister Mohammed Shtayyeh called the attack a "racist act" and said he held Israel's government responsible for "the increasing violence of the settlers."

"This is racism and apartheid," Erekat said in a statement.

'Criminals and hatemongers' behind blaze

Israeli cabinet minister Amir Peretz condemned the incident on Twitter, calling for "the criminals and hatemongers" responsible for the blaze in the city of Al Bireh to be brought to justice.

"The hate virus, like the coronavirus, is a common enemy of all religions and peoples in the world," he wrote.

"Just as everyone together fights the (corona)virus, we must work together to eradicate the hatred virus as well," he added.

He did not explicitly mention settlers in his tweet.

Journalists who arrived at the scene found fire damage at the entrance to the building and in a washroom, and spray-painted slogans in Hebrew reading, "Siege on Arabs and not on Jews," and "The land of Israel for my people!"

According to Palestinian figures, more than 700,000 Jewish settlers now live on 196 settlements which were built with the Israeli government’s approval and more than 200 settler outposts –– built without government approval –– across the occupied West Bank.

READ MORE: By annulling settlement law, is Israel sending a message to the ICC? 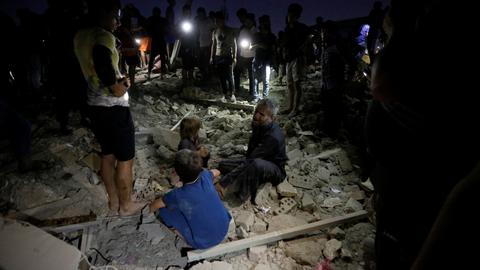 At least 18 killed and dozens wounded in Baghdad blasts