Tens of thousands of Lebanese protesters of all ages gathered in major cities and towns nationwide, with each hour bringing hundreds of more people to the streets for the largest anti-government protests yet in four days of demonstrations.

Lebanon's Prime Minister Saad al-Hariri has agreed a package of reforms with government partners to ease an economic crisis that has sparked nationwide protests, official sources told Reuters, with a cabinet meeting expected on Monday to approve them.

Hariri, who is leading a coalition government mired by sectarian and political rivalries, gave his feuding government partners a 72-hour deadline on Friday to agree reforms that could ward off crisis, hinting he may otherwise resign.

The decisions call for a 50 percent reduction in the salaries of current and former officials and $3.3 billion in contributions from banks to achieve a "near-zero deficit" for the 2020 budget.

It also includes a plan to privatise its telecommunications sector and an overhaul to its crippled electricity sector, a crucial demand among potential foreign donors and investors needed to unlock some $11 billion in funds to Lebanon.

The sources said the budget would not include any additional taxes or fees amid widespread unrest that were triggered in part by a decision last week to put a levy on WhatsApp calls.

The reforms also called for establishing new regulatory and transparency bodies within a "short period" of time to oversee reform plans. Central to protester demands is an end to what they say is rampant corruption destroying the economy.

This comes after massive protests swelled across Lebanon on Sunday in an unprecedented show of dissent against its ruling elite as hundreds of thousands converged to demand the overthrow of a system they see as riddled with corruption and cronyism.

A sea of people, some draped in or holding Lebanese flags, crammed roads nationwide for a fourth day, calling for revolution in protests that resembled the 2011 Arab revolts that toppled four presidents.

Cheerful, buoyant and hopeful their protests would bring change, people of all ages and religions played patriotic songs and danced in the streets, with some forming human chains and chanting for their leaders to be ousted.

Festival-like scenes dominated the country from the capital Beirut to remote towns, with loudspeakers blaring music as crowds kept pouring into the streets. "I am here because I am disgusted by our politicians. Nothing works. This is not a state. Salaries are very low, prices are very high. We don't even have work these days," said Cherine Shawa, 32, an interior architect, in Beirut.

The anti-government protests, fuelled by crippling economic conditions and anger at perceived government corruption, have fanned out across the country since Thursday.

"We're here to say to our leaders 'leave'. We have no hope in them but we're hopeful that these protests will bring change," Hanan Takkouche, in her 40s and among a group of women in the capital. "They came to fill their pockets. They're all crooks and thieves," she added.

Ending rampant corruption is a central demand of the protesters, who say the country's leaders have used their positions to enrich themselves for decades through favourable deals and kickbacks.

Many blamed the ruling elite for driving their children out of Lebanon because they failed to build a country that could provide jobs.

The mounting unrest has piled pressure on Prime Minister Saad al-Hariri to deliver a package of badly needed reforms to bring the country's crumbling economy, which has one of the world's highest debt levels, back from the brink.

Hariri, who is leading a coalition government mired by sectarian and political rivalries, gave his feuding government partners a 72-hour deadline on Friday to agree reforms that could ward off the crisis, hinting he may otherwise resign.

He accused his rivals of obstructing budget measures that could unlock $11 billion in Western donor pledges and help avert economic collapse.

Government sources said Hariri was waiting for his coalition to get on board with the economic proposals, which include taxes on banks and implementing a plan within one month to overhaul the country's costly and crumbling state electricity utility.

Reforming the country's wasteful electricity sector is key for potential investors and donors who consider it one of the biggest strains on the country's depleted finances.

A rising chorus of voices, from union leaders to politicians, have joined popular calls for Hariri's government to resign. The Maronite Christian Lebanese Forces party has said its four ministers would withdraw from the government.

Army troops and security forces deployed across the country and blocked roads leading to the presidential palace, which protesters had tried to reach on Thursday.

Banks said they would remain closed on Monday, the start of the working week, and the country's main labour union announced a general strike, threatening further paralysis.

If Hariri, a Sunni Muslim who is traditionally backed by the West and Sunni Gulf Arab allies, resigns it would be harder for the various parties that make up the ruling coalition to form a new cabinet.

A new cabinet would also likely see Iranian-backed Hezbollah and its allies more in control, a shift that would make it nearly impossible for international donors or Gulf Arab countries at odds with Iran to offer aid or investments.

"We want all of them to go, from the president to the prime minister and ministers," said unemployed Hanan Sinno as she protested in Beirut.

Hezbollah leader Sayyed Hassan Nasrallah has thrown his powerful Shi'ite group's weight behind the current government, saying the country's deep economic crisis means precious time should not be wasted forming a new one.

Without a foreign funding boost, officials and economists predict a currency devaluation or a debt default within months.

The IMF said last week that Lebanon's crisis requires tough austerity measures such as tax hikes and levies on fuel, steps the country's politicians have publicly vowed not to take.

The mounting unrest was triggered in part by a proposed fee on WhatsApp calls, a measure quickly scrapped but that was seen by many as the latest government attempt to squeeze citizens receiving little in return from the state.

Lebanon's economy registered just 0.3 percent growth last year. The IMF said the reforms were needed to stem a ballooning deficit and public debt it forecasts to reach 155 percent of GDP by year-end. 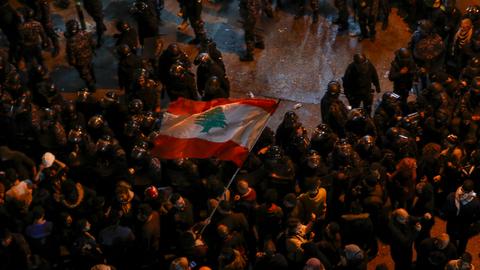 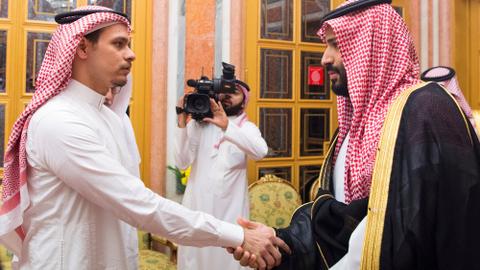