Turkey's President Recep Tayyip Erdogan says the world should not be silent to the humanitarian crisis in Syria's Idlib as it disappears like Aleppo did.

His remarks came at a press conference following a meeting with Czech Prime Minister Andrej Babis at the presidential complex in capital Ankara.

"Idlib is slowly disappearing. Idlib is in a situation that it started to disappear and become torn down in a way Aleppo is. It is not possible to stay silent against this," the Turkish president said.

Erdogan also said he would make all necessary contacts with parties in the region to find a solution to the Idlib situation.

"Turkey is not expelling and closing its doors to refugees, but we will be happy if we can help the establishment of a safe zone [in Syria]."

Babis, for his part, hailed Erdogan’s proposal on Syria safe zone, saying: "Turkey doesn’t want money, but a safe zone with schools, houses and investment inside it."

Also addressing the bilateral trade relations with Turkey, Babis said the trade volume between two countries could be increased.

The Czech premier underlined the great cooperation potential between the two countries, especially in areas such as energy and defence.

“We would like to see Turkish companies in our country," Babis said, mentioning the opportunities in the construction area.

Last Saturday, Erdogan said Turkey will apply its own plan of action, if Turkish soldiers are not allowed to control the safe zone in Syria.

In three weeks, on the sidelines of the UN General Assembly session, Turkey will use the last possibility to find a compromise with the US on building a safe zone along the eastern line of the Euphrates River, he said.

Since 2016, Turkey has conducted two major military operations in northwestern Syria, Operations Euphrates Shield and Olive Branch, to purge the region of terrorist groups Daesh and the YPG, which is the Syrian branch of the PKK terrorist organisation.

In its more than 30-year terror campaign against Turkey, the PKK, listed as a terrorist organisation by Turkey, the US and the EU, has been responsible for the deaths of some 40,000 people, including women, children, and infants. 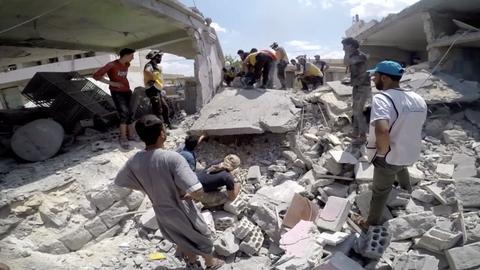