The Syrian regime forces have cut off the two large eastern Ghouta towns of Douma and Harasta by advancing into areas between them and the rest of the opposition enclave, a war monitor says.

Syrian regime forces have intensified its onslaught on eastern Ghouta on Saturday with advances that a war monitor and state media said had splintered the enclave, though an opposition official denied this.

Eastern Ghouta, under regime siege since 2013, is the last remaining opposition-controlled zone on the outskirts of the capital.

Keen to secure Damascus, regime forces launched a fierce bombing campaign on February 18 and then began a ground operation.

Syrian state television broadcast from inside Mesraba, a town lying along the road connecting the northern and southern halves of the opposition-held stronghold.

The capture of Mesraba and advances into nearby farmland brought important roads directly under fire by the regime forces, the Syrian Observatory for Human Rights (SOHR) said.

That has in effect cut the large towns of Harasta and Douma off from each other and the rest of the enclave, it added.

"Regime forces have therefore divided eastern Ghouta into three parts -- Douma and its surroundings, Harasta in the west, and the rest of the towns further south," the Britain-based monitor said.

However, Hamza Birqadar, a spokesman for Jaish al Islam, one of the two main militant groups in eastern Ghouta, denied that either Harasta or Douma had been cut off.

The relentless three-week assault on the last major opposition stronghold near Damascus has captured about half its area and killed 976 people, according to the Britain-based SOHR.

State-run television showed a huge plume of dark smoke rising behind houses and trees in eastern Ghouta, with the sound of blasts in the background.

Syrian regime leader Bashar al Assad and Russia, his main ally, say the campaign is needed to end opposition shelling of Damascus and end the opposition rule over the area's civilians.

These involve the opposition surrendering territory in exchange for safe passage to opposition areas in northwest Syria, along with their families and other civilians who do not want to come back under Assad's rule.

Late on Friday, a small number of militants and their families from the former al Qaeda affiliate previously known as the Nusra Front left eastern Ghouta under such a deal.

But the group represents only a small portion of the militant presence in the enclave. Jaish al Islam and the other main eastern Ghouta militant group Failaq al Rahman have said they are not negotiating a similar deal for themselves.

Capturing the enclave would represent Assad's biggest blow against the opposition since they were driven from Aleppo in December 2016.

It would seal a string of military victories for the Syrian regime leader since the entry of Russian jets into the war on his side in 2015 turned the course of the conflict against the insurgents.

The intensity of the regime's attack on an enclave that has been besieged since 2013 and suffers acute shortages of food and medical supplies has drawn Western condemnation and demands by UN aid agencies for a humanitarian halt in fighting.

State television broadcast from Mesraba showed a large group of civilians hiding in a house. People across eastern Ghouta have sheltered in basements from the ceaseless bombardment in recent weeks.

State media said the 60 civilians found in Mesraba by the regime forces had been held by militants as human shields, something the opposition groups deny.

Footage taken on the streets of Mesraba showed tanks near half-collapsed buildings and walls pocked with bullet holes.

The UN estimates that 400,000 people are trapped in eastern Ghouta.

"Living conditions are harsh ... Shop owners and traders are sending their workers to the shelters to sell food for three times the price before the offensive," said a man in the eastern Ghouta town of Saqba who identified himself as Abu Abdo in a voice message.

Efforts to convey food and medicine

Aid agencies have tried to deliver food and medicine into eastern Ghouta, but have been able only to bring in a portion of the amount they wanted.

A convoy was unable to finish unloading on Monday because of continued fighting, bringing in the remaining undelivered food parcels on Friday despite bombardment nearby.

However, UN agencies said most medical supplies had been stripped from the convoy by Syrian regime officials and that the food supplies brought in were insufficient.

Allegations over use of chlorine gas

Medical charities operating in eastern Ghouta have reported several incidents in recent weeks of what they say was chlorine gas use in regime bombardments, causing choking symptoms.

On Saturday, Syria's deputy foreign minister, Faisal Mekdad, rejected those charges and accused the United States of orchestrating the accusations in order to support militant groups.

"We did not deny a single request for investigation," Mekdad told a news conference.

The regime has opened what it says are several safe routes out of eastern Ghouta for civilians, but none are known to have left so far. Damascus and Moscow accuse the opposition of preventing people from fleeing the fighting.

Civilians in eastern Ghouta are in desperate need of a #Ceasefire. All parties must protect civilians and try to find a political solution.https://t.co/VQrLTuIbvD via @refugees

Opposition groups in eastern Ghouta deny this, saying people have not left for fear of regime persecution, but a Reuters witness on Friday saw gunfire and mortar fire from inside opposition territory near one of the crossing points.

Sajjad Malik, the UN High Commissioner for Refugees representative in Syria, who went in with the convoy on Monday, said in comments published on the agency's website that people did not feel safe to leave.

People in Douma told him they feared crossing opposition checkpoints and were uncertain whether they would be safe when they reached regime-held areas, Malik said. 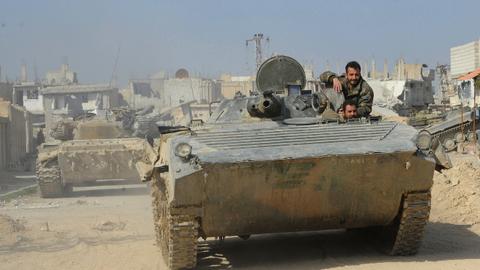 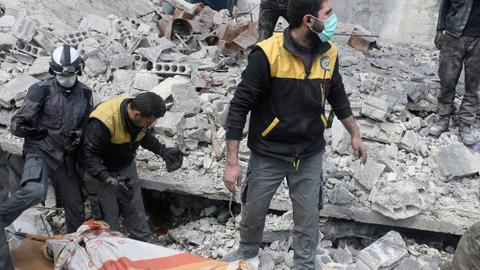