Implementation of a 2012 roadmap to UN-supervised elections in Syria has been discussed by US and Russian diplomats, says Ambassador James Jeffrey amid ongoing attacks in north-west Syria.

Top US and Russian diplomats discussed step-by-step implementation of a 2012 roadmap to UN-supervised elections in Syria that could allow the  Syrian regime "to move back into the international community," the US envoy for the war-torn country said Wednesday. The discussions come as regime operations in the north-east claimed at least 18 lives, a war monitor said Thursday.

Ambassador James Jeffrey's comments indicated a new US-Russian engagement on efforts to end the eight-year Syrian conflict that has killed over 400,000 people and lift Syria's isolation in the West and elsewhere.

But Jeffrey cautioned that "this is just a potential way forward."

He noted there have been no steps such as a cease-fire in the last opposition and rebel-held stronghold in Idlib that the Trump administration is demanding or the convening of a committee to draft a new constitution for Syria as called for in the roadmap.

Such steps "would give us confidence that the Assad regime actually understands what it must do to help end this conflict," he told reporters after a closed UN Security Council meeting on Syria's political situation.

Jeffrey, the US special representative for Syria engagement, spoke of discussions that he and Secretary of State Mike Pompeo had in the Russian Black Sea resort of Sochi in mid-May with Russian President Vladimir Putin and Foreign Minister Sergey Lavrov.

The latest strikes in the fiercest wave of regime bombardment on the militant enclave in northwestern Syria killed at least 18 people, said a war monitor Syrian Observatory for Human Rights (SOHR) on Thursday.

#SOHR More than 750 airstrikes and rocket shells at the end of the 30th day of the campaign of the fiercest escalation, target the areas of the #Russian – #Turkish trucehttps://t.co/4z7QHjvrrC

The June 30, 2012, Geneva agreement on a blueprint for peace in Syria was approved by representatives of the UN, Arab League, European Union, Turkey, and all five veto-wielding Security Council members — the US, Russia, China, France and Britain.

It calls for a Syrian-led political process starting with the establishment of a transitional governing body vested with full executive powers, moving on to the drafting of a new constitution, and ending with elections.

The Security Council unanimously endorsed the agreement in Resolution 2254 adopted in December 2015 that set a timetable for talks and a cease-fire that was never met.

Jeffrey said that at the Sochi meeting with the Russians, "we talked about ... the potential way forward to see a step-by-step implementation of UN Resolution 2254 in return for steps that would allow a Syrian government that adheres to 2254 to move back into the international community."

The United States initially insisted that any future Syrian government must not include regime leader Bashar al Assad, but it appears to have dropped that demand. Jeffrey's comment wasn't clear on whether Assad could remain in power if he adhered to Resolution 2254 and won a UN-monitored election.

Russian Deputy Foreign Minister Sergey Vershinin called the Sochi talks "positive and constructive." He said Moscow is ready to coordinate its efforts "with anybody — with American partners also — on the basis of our shared commitment to the sovereignty, territorial integrity and political independence of Syria."

Vershinin said the effort must be "about a common vision of how we want to hit a sustainable political settlement in Syria being accepted by all Syrians, by the region and endorsed by the UN Security Council."

The council was briefed Wednesday by the UN special envoy for Syria, Geir Pedersen, who welcomed support from all 15 members for his efforts to end the fighting in Idlib and to move ahead on the political front.

He reiterated that "we are very close" to forming a 150-member committee to draft a new constitution, saying the political will is needed to reach agreement on the final names and the rules of procedure.

Pedersen said the US-Russia meeting in Sochi was "extremely important and is a positive opening for a way to move forward on the political front."

"I believe that cooperation between Russia and the US is essential for us to be able to move forward in the political process, and that's what I'm hearing from both my Russian friends and my American friends," he said.

But Pedersen said the escalating military action in Idlib is complicating political efforts.

"Our conversations with the Russians have not indicated that the Russians are ready to support a full-scale offensive into Idlib," he said. "They tell us this is only a limited set of military operations against specific terrorists."

Russia's Vershinin reiterated Moscow's commitment to implement the cease-fire agreement reached with Turkey in Idlib. At the same time, he said, "it is our obligation, if not the right, to fight terrorists," saying that Al Qaida-linked Hayat Tahrir al Sham controls 99 percent of the de-escalation zone.

If there is no cease-fire in Idlib, Jeffrey said, the US is looking at "a set of primarily economic and diplomatic steps that will continue to keep this regime under pressure — and as long as the Idlib situation continues, we will look for ways to heighten that pressure."

Meanwhile, the European Union called on Wednesday for a ceasefire in Idlib province and said Russia, Turkey, Iran and the Syrian regime must protect civilians under siege.

At least 180,000 people have fled a surge in violence in the province in north-west Syria. Regime bombing has killed dozens in the past three weeks.

The Syrian regime says it is responding to attacks by Al Qaeda-linked militants.

"We expect the Syrian regime and the Astana guarantors to fulfil immediately their responsibilities and commitments, and ensure the immediate protection of civilians," the EU's top diplomat Federica Mogherini and its humanitarian aid chief Christos Stylianides said a statement, referring to Russia, Turkey and Iran's peace efforts.

"Indiscriminate attacks on women and children and other civilians, their displacement, and the destruction of civilian infrastructure cannot be justified under any circumstances."

Fighting has raged in Idlib and surrounding areas since Syrian regime forces started pushing into the enclave on April 30.

The region, home to an estimated 3 million people, including many who fled other parts of Syria as regime forces advanced in recent years, has been partly shielded by a truce agreement since last year, brokered by Russia and Turkey.

Much of the recent fighting has hit a buffer zone agreed under that deal. 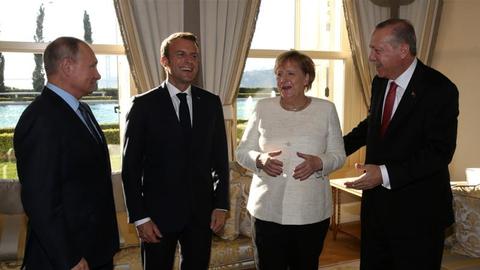 Can EU countries make any difference in Syria?