Up to 60 percent of beneficiaries at seven centres in Sanaa "confirmed they had not received any assistance" and 33 percent of respondents in the rebels' northern stronghold of Saada received no food in April, says head of the UN food agency.

The head of the UN food agency accused Yemen's Houthi rebels on Monday of diverting food from the war-torn country's hungriest people and threatened to suspend food aid later this week unless they immediately implement registration and monitoring agreements.

David Beasley, executive director of the World Food Program, told the UN Security Council that the agency in late 2018 uncovered "serious evidence that food was being diverted and going to the wrong people" in the capital of Sanaa and other Houthi-controlled areas.

As examples, he said up to 60 percent of beneficiaries at seven centres in Sanaa "confirmed they had not received any assistance" and 33 percent of respondents in the rebels' northern stronghold of Saada received no food in April.

He said WFP has insisted on — and the Houthis finally agreed to — registration and biometric identification of beneficiaries and monitoring in December and January, but the agency has faced roadblocks ever since in implementing the agreements.

Beasley said he wrote to Houthi authorities again asking for action, not words.

"If we do not receive these assurances, then we will be gin a phased suspension of food assistance, most likely towards the end of this week," he said.

The Associated Press reported Dec. 31 that armed factions on both sides of the conflict were stealing much-needed food aid, diverting it to their fighters or reselling it for profit. Some groups are blocking deliveries to communities they view as their enemies, AP found. WFP confirmed the report.

On Jan. 1, the Houthis said they were "surprised" by the WFP's accusations and accused the food agency of taking sides in the war.

Beasley told the council Monday that the diversions were mainly in Houthi areas.

When there are reports in government-controlled areas, he said, "we receive cooperation to address issues."

Mohammed Ali al Houthi, a rebel leader, accused the WFP of sending expired food to Yemen. He demanded the agency distribute cash rather than their "corrupted food," according to the Houthi-run al Masirah TV.

The conflict in Yemen began with the 2014 takeover of Sanaa by the Iranian-backed Houthis, who toppled the government of Abd Rabbu Mansour Hadi. A Saudi-led coalition allied with Yemen's internationally recognised government has been fighting the Houthis since 2015.

Saudi-led airstrikes have hit schools, hospitals and wedding parties and killed thousands of Yemeni civilians. The Houthis have used drones and missiles to attack Saudi Arabia and have targeted vessels in the Red Sea.

'Yemen is getting more violent'

Civilians have borne the brunt of the conflict, which has killed over 10,000 people and created the world's worst humanitarian crisis.

UN humanitarian chief Mark Lowcock told the council that 80 percent of Yemen's population — more than 24 million people — "need assistance and protection, including 10 million who rely on food aid to survive."

"Yemen is getting more violent, not less," he said, noting that "today there are more than 30 active front lines" in the country.

"Fighting this year has displaced more than 250,000 people," Lowcock said. "The number of incidents killing or injuring children more than tripled between the last quarter of 2018 and the first quarter of this year."

UN special envoy for Yemen Martin Griffiths, Lowcock and many council ambassadors expressed concern at the increase in attacks on Saudi Arabia, especially the recent drone attacks on the airport in Abha in the country's southwest that the kingdom said injured 26 people.

Griffiths repeated his warning that "war can take peace off the table, and in the context of wider regional tensions, the risks to the political process (in Yemen) have never looked more stark."

He told the council that while the reduction in violence around the key port of Hudaida has been maintained since an agreement in Stockholm in December, negotiations on the redeployment of government and Houthi forces are still taking place.

"I am also deeply disappointed by the lack of progress on the implementation of the exchanges of prisoners and detainees agreed in Stockholm," he said.

The Security Council expressed support for Griffiths and reiterated that there can only be a political solution to the Yemen conflict. 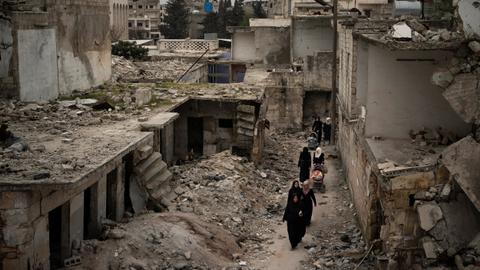