More than 42,000 Palestinians in besieged Gaza are internally displaced as they flee Israeli air strikes and seek shelter in UNRWA schools and elsewhere, the refugee agency says.

Israel's relentless bombardment on Gaza that Tel Aviv has been blockading from land, air, and sea since 2007 has internally displaced more than 42,000 Palestinians.

"Seventy-three years after the creation of the Palestine refugee issue, the loss of their homeland and dispossession of their property continues," United Nations relief agency UNRWA said on Monday.

"42,000+ Palestinians in the Gaza Strip are internally displaced as they flee Israeli air strikes and seek shelter in UNRWA schools and elsewhere," it said in a tweet.

At the same time, UNRWA said eight Palestine refugee families who have lived for decades in the Sheikh Jarrah neighbourhood in occupied East Jerusalem "continue to face imminent forced eviction, placing them at higher risk of forced transfer."

"This latest escalation of violence and threat of dispossession is part of the ongoing Nakba [catastrophe]. Neither the imminent forced evictions of the Sheikh Jarrah residents nor the ongoing air strikes on Gaza are isolated incidents," UNRWA said.

It comes as the death toll from the ongoing Israeli attacks on the besieged Gaza soared to 212, the Palestinian Health Ministry said on Monday.

The grim figure includes 61 children, 35 women and 16 elderly people, the ministry said in a statement, while 1,400 people have been wounded during the attacks.

The Israeli military has staged strikes across the Palestinian enclave since May 10, leaving behind a massive trail of destruction across the seaside territory.

Ten Israelis have also been killed in Gaza's rocket fire.

The recent tensions that started in occupied East Jerusalem during the Muslim holy month of Ramadan spread to Gaza as a result of Israeli assaults on worshippers in the flashpoint Al Aqsa Mosque compound and Sheikh Jarrah neighbourhood.

Israel occupied East Jerusalem, where Al Aqsa is located, during the 1967 Arab-Israeli war. It annexed the entire city in 1980 in a move never recognised by the international community.

Meanwhile the situation for Palestinians displaced from their homes following heavy bombardment by Israel in Gaza is taking another difficult turn.

They first turn to UN schools, hoping to be provided with shelter and security.

But the structures are getting overcrowded and the displaced families say they are not getting any help.

"The majority of the people who came to the shelter centres (school) and didn't receive any supplies, returned back to their homes under fire," said Bilal Bardaa, a displaced man from east Gaza.

He said he hasn't received any help from the UN agency for Palestinian refugees, or UNRWA, despite being at their centre for three days.

As Israeli bombardment began and intensified over the last several days, Palestinians grabbed their children and belongings and fled neighbourhoods on the outskirts of Gaza City, taking shelter in UN-run schools across the territory.

Families arrived at the schools in pick-up trucks, on donkeys and by foot, hauling pillows and pans, blankets and bread, as Israel unleashed a heavy barrage of artillery fire and air strikes, killing a family of six in their home.

UNRWA officials have said that the UN agency had not opened the schools to the displaced, but that thousands of Palestinians "broke into" 16 schools fearing Israel's bombing and shelling campaign.

"We opened the schools with our hand," said Um Dawood, another displaced Palestinian from Gaza's north.

"We thought that we have no choice except UNRWA schools. So far, the UNRWA didn't acknowledge us. We are here at UN schools since three days ago and it's the second night to sleep on the floor," she said.

Israel has come under heavy international criticism for civilian casualties during three previous wars in Gaza, which is home to more than two million Palestinians. 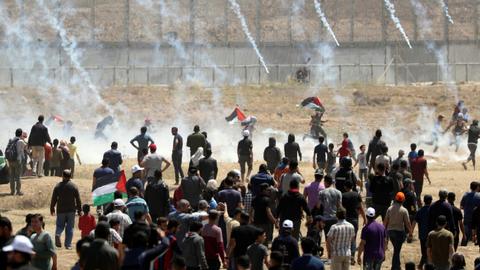