The non-binding resolution was introduced by Democrats after Trump's order to kill an Iranian commander and retaliatory missile strikes by Iran dramatically escalated tensions between the two foes.

US House votes to limit Trump war powers against Iran

The US House voted Thursday to restrict President Donald Trump's future military action against Iran, as lawmakers sought to claw back congressional war powers from the White House.

The vote, 224 to 194, was largely along party lines, although three members of Trump's Republican Party joined Democrats in approving the measure that demands the president not engage in military action against Iran unless authorised by Congress.

The measure will “protect American lives and values” by limiting Trump's military actions, Speaker of the House Nancy Pelosi said.
The House vote came a day after the Trump administration briefed lawmakers on its actions in Iran. Democrats and several Republicans called the briefings inadequate, adding that officials did not provide enough details about why the attack was justified.

US officials believe that Iran accidentally shot down a Ukrainian airliner, killing all of the 176 people on board, US media reported on Thursday.

US President Donald Trump also said the deadly crash of a Ukrainian plane could have been a mistake, adding that he had a terrible feeling about the downed airliner.

"Somebody could have made a mistake," Trump told reporters at the White House, adding that he had suspicions about the crash but gave no other details.

Turkey does not want Iraq to become a battle zone of foreign forces, Turkey’s foreign minister said on Thursday, amid US-Iran tensions.

"We don't want Iraq to be the battle zone of the foreign forces," Mevlut Cavusoglu told a press conference along with his Iraqi counterpart in Baghdad.

He added that Iraq was not alone and Turkey was there to overcome difficult days together.

Iraqi top diplomat Mohamed Ali AlHakim, for his part, affirmed that talks with his Turkish counterpart focused on the need to respect Iraq's sovereignty from all sides.

He said if the US and Iran go to war, there will be "no winner" and there will be consequences for not just the region but the whole world.

Harsher revenge around the corner - IRGC

In a separate report, Tasnim quoted the deputy head of Islamic Revolutionary Guard Corps (IRGC), Ali Fadavi, as saying Iranian missile attacks on US targets were a display of Iran's military power and said US forces "couldn't do a damn thing."

Iran is informing the United Nations that it took “a measured and proportionate military response” to the US airstrike that killed its top military commander and “does not seek escalation or war.”

But Iran’s UN Ambassador Majid Takht Ravanchi warned that Tehran would “vigorously” respond to “any further military adventurism against it” and “any aggression.”

Ravanchi said Iran was exercising its right to self-defence under Article 51 of the UN Charter.

“The operation was precise and targeted military objectives thus leaving no collateral damage to civilians assets in the area,” Ravanchi said.

Milley and Defence Secretary Mark Esper told reporters that 11 ballistic missiles that landed at Asad airbase in Iraq inflicted moderate damage, such as destroying or damaging tents and a helicopter, but no Americans were killed or injured.

“I believe based on what I saw and what I know is that they were intended to cause structural damage, destroy vehicles and equipment and aircraft and to kill personnel,” Milley said.

Milley said the fact that no one was killed was due to the defensive procedures and the effectiveness of US early warning system.

A handful of major shippers operating in the Gulf Strait are curtailing operations there.

Several oil tankers operated by major players have diverted away from the Persian Gulf or delayed loading by several days.

I'Anson said a tanker chartered by Brazilian oil giant Petrobras was supposed to load up with oil in Basra on January 5, but instead, it left the Gulf Strait empty. He said another tanker operated by a major oil shipper has been idling in the Arabian Sea for about a week.

I'Anson says the disruptions are minor right now. But he said, “That’s a lot of money to be out in the sea with no oil going nowhere.”

One-fifth of the oil consumed by the world passes through the narrow waterway, which Iranian officials threatened to close in April in response to US sanctions.

Turkish Airlines flights would be suspended as a precaution until 1800 GMT Thursday.

Turkish Airlines flights will not use Iraqi and Iranian airspaces during this time and planes would change their routes, the agency said.

Commercial airlines are rerouting flights throughout the Middle East to avoid potential danger during heightened tensions between the United States and Iran.

President Donald Trump, used his address late on Wednesday from the White House, to speak directly to Iran, saying, “We want you to have a future and a great future."

He said the US is ready to embrace peace and all who seek it.

Trump said the US will immediately impose new sanctions on Iran in response to the missile attacks on military bases in Iraq that house US troops.

Those new "powerful sanctions" will remain until Iran abandons its nuclear ambitions and ends its support for terrorism, he said. 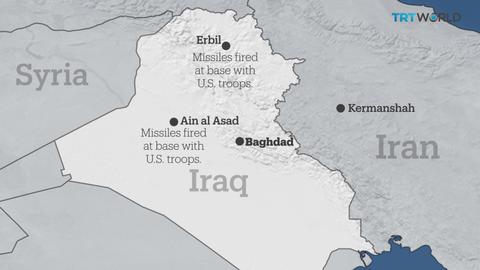 The significance of US bases hit by Iran