Gen Z Muslims in the US have never known a world without the 'War on Terror'. But most young Muslims today are rejecting the corner they had been painted into.

In a speech delivered on October 1, 2011, President George W. Bush announced the start of the War on Terror (WOT). Referring to the day now simply known as 9/11—Bush declared:

The attack took place on American soil, but it was an attack on the heart and soul of the civilized world. And the world has come together to fight a new and different war, the first, and we hope the only one, of the 21st century. A war against all those who seek to export terror, and a war against those governments that support or shelter them.

Two decades later—on the twentieth anniversary of the 9/11 attacks, and when the US has, to devastating consequences, recently withdrawn from Afghanistan to end the nation’s longest-ever war—what has become abundantly clear is that the vast majority of the War on Terror’s victims have not been “all those who seek to export terror” or their governments.

Instead, they have been hundreds of thousands of innocent civilians caught in US dragnets spanning Iraq and Afghanistan, and all across the US itself (including at Rutgers University in New Jersey, where I teach, when in 2012, it was revealed that the New York Police Department had been conducting surveillance on Muslim students at both the Newark and New Brunswick campuses). They have also been an entire generation of US Muslims born and raised “on American soil” from the mid-1990s through the early 2000s—i.e. “Gen Z” Muslims—for whom there has never been a world without a WOT, and whose engagements with their own identities, faith, and culture have emerged under the constant specter of “Islamic terrorism.”

Indeed, this is the WOT’s primary legacy: a sprawling, global infrastructure of surveillance, detention, and carceral power that is both physical and ideological, producing common sense logics that span, and are pervasive though, the spaces of US culture, politics, and media.

Despite Bush’s, the NYPD’s, and other US officials’ words to the contrary (e.g. “Islam is peace”), most Americans are far more familiar with tired stereotypes of despotic Muslim men and oppressed Muslim women than actual Muslims, the result of longstanding orientalist tropes that relegate Islam to the “Middle East,” while also playing upon domestic associations between Islam and Black radical politics (i.e. Malcolm X and the Nation of Islam).

This infrastructure is part and parcel of Gen Z Muslim American life.

Since 9/11, I have witnessed its machinery: countless stories of middle-of the-night raids on US Muslim citizens, friends and colleagues who find their names on no-fly lists, and Muslim youth who tell me of surveillance on their mosques, community centers, and even their homes.

For some, in particular, Black American Muslims, this type of profiling is nothing new, as their communities have long been subjects of state surveillance and attack. For other first or second generation US Muslims, with South Asia, Arab, or North African roots, such treatment has shattered their illusions of America as a space of safety and possibility, of justice and “freedom.”

Even for those who have had no direct experiences of surveillance or profiling, US Muslims in their late teens and 20’s have heard an American president declare “Islam hates us,” seen lips turn and snarl at the mention of Muslims, and in the case of US Muslim women, in particular those in headscarves, know that they move through the world not as people, but as victims of Islam’s supposed oppression of women, as distorted projections and symbols of Terror.

As a scholar of race and religion, specifically, of the history of Islam and Muslims in the United States, and an educator who has worked closely with young US Muslims for the past two decades, I think often about the effects of the WOT on my students. I have certainly seen Trauma with a capital “T”—young people suffering from PTSD, anxiety, and depression from their own direct experiences of detention and surveillance, of being the target of hate crimes, or as the result of the constant epithets and insults directed at their faith and culture.

But far more often, I see the little “T” traumas—those small, seemingly-mundane, everyday experiences of US Muslims that have been shaped by the infrastructures of terror. Like feeling ashamed of being Muslim, or hiding it from others. Discomfort when entering a room, unsure of the intentions behind other’s stares. A nagging sensation that they might be attacked.  Deciding not to pray, or becoming more “secular” to fit in. Taking off the headscarf to feel more safe. Or putting on the headscarf to feel more Muslim. Assimilating. Feeling alienated from God. Feeling angry at God. Self-hatred. Embarrassment. Fear.

Most of these thoughts and feelings may not even register as “trauma,” but instead minor sensations that occasionally occur in their daily lives. At times, they intersect with other identities, e.g. as African American, or a refugee, as a convert, Bangladeshi, or working-class, or queer. Over time, these “traumas” become familiar, expected, and even, acceptable— part of what it means to be Muslim in America.

Writer Toni Morrison once said, “The function, the very serious function of racism is distraction. It keeps you from doing your work. It keeps you explaining, over and over again, your reason for being.”

This is what concerns me most about these small ‘t’ traumas: the normalcy of distraction, the ways in which an entire generation of US Muslims feel they must constantly explain themselves in the face of terror, that they must justify their reasons for being.

Thankfully, most young Muslims I know are rejecting this. Many have taken it upon themselves to educate themselves about their religion, and to delve into the long history of Islam’s legacy and presence in the United States, which spans 400 years, and is deeply intertwined with histories of social justice and struggle in the Americas.

I will always recall a Muslim student in my Islam in/and America class a few years ago, after reading The Autobiography of Malcolm X, proclaiming his wonder at the incredible range of Malcolm’s visions on Black liberation, Islam, and human rights. “We should be having those visions too,” he told me, “except we’re always so busy defending ourselves against what other people think of Islam.”

Twenty years after 9/11, we now have a new generation of US Muslims that has grown up with—and is realising they have outgrown—the infrastructure and logics of the War on Terror. As far as I can tell, they’ve recognised its distractions, and are endeavoring to build new identities and visions on their own terms. 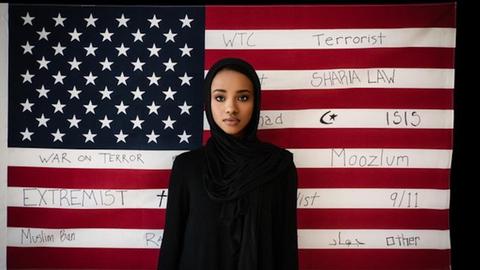 Understanding American Islamophobia in the age of Trump