A symbol of the Siege of Sarajevo emerging from the ruins

A survivor of the Bosnian war recounts his visit to a neighbourhood on the frontlines of the bloodiest war in modern European history.

Sarajevo, March 21, 1996. Only two days before, Grbavica, the last neighbourhood under Serb control, had been handed over to the Bosnian government forces. Three months prior, the Dayton Peace Accord was signed, putting an end to the three-and-a-half-year-long war in Bosnia-Herzegovina, the bloodiest on European soil after the Second World War. The atrocities of the Bosnian War shocked the world. And the reluctance of European and other world powers to end the massacres and genocide remains a testament to the incapacity of the international community.

Grbavica was a Sarajevo neighbourhood that was taken over by Serb forces during May and June 1992. Close to the city centre, it was the neighbourhood controlled by the army of Ratko Mladic.  Just a few hundred metres separated the residents of downtown Sarajevo from Serb snipers and heavy artillery.  On the bridge connecting Grbavica with the city centre, the first civil casualties of the Siege of Sarajevo were sniped by Serb paramilitaries.

Almost four years later, having survived the longest siege in modern warfare, I decided to step onto the former frontline and visit the neighbourhood that had been occupied by those who besieged my home city, resulting in the death of more than 11,000 of its citizens. I was 19 years old.

The trams had already started operating. I got off at Socijalno stop—a few hundred metres from one of the frontlines most fiercely fought over during the siege. I was alone. Soon, I was standing on the wide Milutina Duraskovica Street (today’s Topal Osman-pase Street): on my left, Grbavica. Just two days before, Serb extremists had ransacked and burned down the remaining apartment buildings before withdrawing into Republika Srpska.

On my right, Hrasno, a neighbourhood defended by the Bosnian government forces. In front of me, the destroyed FC Zeljeznicar Stadium. The scenes I saw that afternoon will haunt me for the rest of my days.

Eerie silence. Buildings burned to the ground on both sides of the street. Metre-long overgrown and leafless hedges. Dozens of burned car wrecks. Mountains of rubble, garbage and broken furniture were everywhere around me. The once-beautiful Loris building: burned, hit and drilled by thousands and thousands of shells and bullets. It looked like a monstrous piece of Swiss cheese. The last edge of the building next to the Stadium was blown up by dynamite. The concrete walls and ceilings were hanging down like dreadful bellows of an accordion.

Two older men were walking in front of me. Every step of mine echoed in the empty, razed buildings around me. With a great deal of fear of what I might see, I approached the Stadium and took a short glance just two blocks further at the apartment building in Hrasno where my aunt had lived before the war. The left side of the building was destroyed by hundreds of shells, my aunt’s apartment on the sixth floor, bombed to pieces, was now an empty hole gazing back at me.

Memories came flooding back. Just a few years before, this boy was standing on that apartment balcony, listening to the hubbub of FC Zeljeznicar fans on lukewarm Sunday afternoons. The trolleybuses were humming on the broad avenue connecting the Stadium with downtown. From the balcony, you could see a part of the stadium pitch. I would raise myself on tiptoes, trying to see if my favourite team would score. From there, I could also catch glimpses of the orange-coloured Loris building, constructed in the golden era of Sarajevo in the early 1980s. How great it would be to live in this beautiful building with modern shutters on the windows, I thought back then.

Everything I could see from that balcony had turned to rubble. Still, a feeling of relief overtook me. The war and the Siege were over. Sarajevo was united again. The re-integration of the Bosnian capital under a single control of the Bosnian Government was a prerequisite to lasting peace in the country.

I looked over to the Loris building again: during the siege, this long structure became one of the symbols of resistance and defence. It protected thousands of Sarajevans living behind it, but it also remained a home for those who refused to leave their apartments, even in the state of total destruction. Situated right at the frontline, people went in and out of Loris using a deep entrenchment network, which connected it to the blocks in Hrasno, controlled by the Bosnian government forces.

Just a few years after the end of the Siege, the two entrances of the building next to the Stadium were renovated. The remaining seven entrances stayed unrepaired until this year. Former residents began returning to their apartments in 1996, new ones moved in in the following years. Everybody fixed their apartments on their own. The former Swiss cheese turned into an ugly patchwork of brick walls and different types of windows.

Over the last 25 years, the rain and sun have washed out the soot from the orange-coloured facade. Now, the residents have decided to renovate the rest of this iconic building. Loris will be among the last of the buildings destroyed during the Siege of Sarajevo to get renovated.

Today, a deep crisis is simmering in Bosnia-Herzegovina, and the secessionist politics of the Republika Srpska regime pose a serious threat to the hard-won peace in this country, nearly 30 years after the beginning of the Siege. Many Bosnians fear a new war. In a few months, the last scar of war on the Loris facade will disappear for good. The scars on our memories will probably hurt for the rest of our lives. Nedad Memic, born in 1977, survived the Siege of Sarajevo from 1992 to 1996. After finishing his bachelor studies in German and English philology at the University of Sarajevo in 2001, he moved to Vienna, Austria. He holds a PhD in German linguistics from the University of Vienna and currently works as a Senior PR Consultant in Austria’s capital. 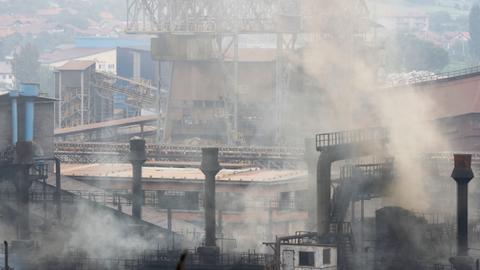