A photograph posted to social media of a man sleeping in uniform while on break has caused a national scandal in France.

France has been in political, social and economic chaos since November of last year when the Gilets Jaunes rioters took to the streets to demand better living conditions as well as a halt to the rise in petrol prices.

The last month and a half have seen strikes and riots against Emmanuel Macron’s plans for drastic reform of the country’s pension scheme. Trade unions organised massive street demonstrations that have already affected France’s financial health.
In addition, this week has seen an African economic migrant from Mali, Adama Cisse, take a powerful private cleaning company Derichebourg to an industrial tribunal in Creteil, for unfair dismissal without compensation.

The case may well set a precedent in law, whatever its outcome (to be determined on June 19), as it touches on diverse issues of significance to France. These include the rights of its subclass of ‘sans papiers’ workers who do its menial jobs; questions about privacy and the ownership of one’s image; crony capitalism; social polarisation as well as the pressing concerns surrounding race.

Derichebourg is regularly awarded government contracts by the city of Paris to collect household rubbish and recyclables in six different arrondissements (municipalities) of the city, including the highly-exclusive 1st and 7th ones.

Eight years ago, the company employed Adama Cisse – who is poor and semi-literate in French – to collect rubbish.

On September 20, 2018, a photo of him asleep on a shopfront ledge during his break began circulating on social media. It had been snapped without his permission by a white woman, Catherine Deschateaux, who tweeted it along with this snide comment: "This is what local taxes paid by Parisians are used for: to pay refuse collectors to snooze. You see why Paris is so disgusting!"

She tagged several media outlets, as well as tagging the Mairie de Paris - who complained to its private contractor Derichebourg.

Deschateaux’s tweet had severe consequences for Adama. He was dismissed for "being seen" to be asleep on the job. His lawyer, Joachim Scavello, argued that the incident had been ripped out of its proper context and magnified unfairly.

The rubbish truck had been running ahead of its scheduled timetable, so its driver stopped for a 20-minute break. Adama was allowed to have a rest at this point, as his foot was giving him trouble from a fracture.

The two men went back to the job right afterwards and still managed to finish on schedule.

Scavello is having to deal with a new area of social media and law - which is being legislated on the fly. He is seeking to defend Cisse’s right to his image: "Today, we have judges at every street corner with their smartphones, ready to judge anyone. The judgement does not concern a bad performance, but a bad image."

Adama Cisse, invited on several TV channels, said: "I was suffering from a sharp pain in my left foot, so was lying down as a result of it. The person who took my photo did not try to understand what was going on, and could not have cared less about my health! Such things should not be done."

The person accused of denouncing Adama Cisse on Twitter has since been a victim herself to insults and foul language online. Her name and photo are now circulating on the web.

Adama Cisse underlines that he "was certainly the victim of tweets that went viral on social media at the time of his dismissal, but says he does not want other people to undergo the effects of such unleashing of public censure.’

It is not yet clear if Derichebourg legally employed Adama Cisse since he preferred not to seek help in a hospital. Did he have access to the French healthcare system?

If Cisse turns out to be an asylum seeker, his employer Derichebourg may well be disciplined for hiring him.

Sleeping on a Parisian pavement in a recognisable and marked green and yellow uniform may not send a great image as far as the Parisian mayor’s office is concerned, but it nevertheless begs the question: what part did his race play in what is becoming an increasingly-brazen racist France.

If Cisse had been white, would the story have been different? Would this have swayed the person who took the photo, not to post it on Twitter, or use such strong language, which consciously or not, seems to equate blackness with dirt?

Adama Cisse has been jobless since his dismissal, and keeps repeating on TV that he is only "here to work".

We don’t know if Adama Cisse risked his life like so many other people from Senegal, Ivory Coast, Mali or Guinea do every day to come to France.

Upon arrival, they struggle hard to find work or a place to live. Many end up homeless and hungry.

It is a precarious existence under any circumstances, but in this case, made even more so by the mighty double-edged sword of social media – and those who wield its power without any knowledge of the life-changing consequences it can have on someone less privileged than them. 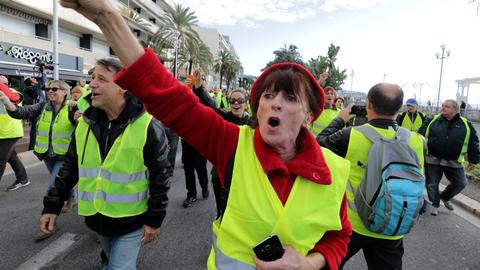 One woman dies in 'yellow vest' protests against Macron in France