DR Congo’s case for reparations is accountability in practice

A call for reparations holds states accountable for the atrocities they committed. When it comes to the DRC, Belgium would do well to go beyond empty words and performative gestures.

On May 28, Germany formally apologised to Namibia for what it now recognises was a genocide of the local Herero and Nama people carried out in 1904 and 1908 by its troops.

Germany will pay $1.3 billion for reconstruction and development projects in Namibia as a “gesture of recognition of the immeasurable suffering that was inflicted on the victims,” as stated by its Foreign Minister Heiko Maas, who described the events as “genocide.”

This is not the first time Germany has paid reparations to another nation: ‘The Reparations Agreement between Israel and the Federal Republic of Germany’ was signed in 1952 and implemented over a period of 14 years.

Interestingly enough, the day before, French President Emmanuel Macron attended a memorial in Kigali and paid recognition of France’s role in the Rwandan genocide. Speaking at the Gisozi genocide memorial, where more than 250,000 victims are buried, he said: “I hereby humbly and with respect stand by your side today, I come to recognise the extent of our responsibilities”.

His speech however, did not mention any form of financial compensation for the damages caused and lives lost. More importantly, he did not highlight the impact the genocide had on its neighbouring country, the Democratic Republic of Congo (DRC), where a humanitarian crisis is still being felt today after the eastern region of the country plunged into conflict over ethnicity and natural resources.

The expression of recognition and apology of the two countries' historic role in the atrocities that occurred is of great importance in the step towards healing and fostering a better relationship with the respective African states affected by their actions.

This raises an interesting conversation in regards to reparations to African nations, in particular the DRC.

Germany’s statement stands in stark contrast to King Philippe’s apology in June 2020, which coincided with the Black Lives Matter protests due to the murder of George Floyd in police custody in the US.

After Belgian citizens had demonstrated and statues of King Leopold II had been vandalised, King Philippe in a letter to Congolese President Felix Tshisekedi wrote: “I would like to express my deepest regrets for these wounds of the past, the pain of which is now revived by the discrimination still too present in our societies. I will go on fighting all forms of racism.”

Overall, the statement was grossly insufficient and lacked a genuine acknowledgement of Belgium’s colonial legacy in the DRC. Philippe did not mention King Leopold II nor did he suggest how the royal family or the Belgian state would financially compensate the country, given the fact that it owes its financial wealth to the exploitation of the DRC.

Too often have Western countries admitted and expressed their “regrets” for the atrocities committed during colonial rule. It therefore raises the question, at what point will they stop apologising and start compensating?

It is very much a moral question and important to state that irrespective of how much financial compensation is given, they cannot wipe clean the impact of their actions from history.

It’s importance becomes especially clear considering Prince Laurent defended King Leopold II, stating: “He never went to [DRC] himself…I do not see how he could have made people there suffer."

The case of the DRC is one that is often overlooked and classified as a story of a typical African country where poverty, conflict and corruption is a byproduct of its environment.

This narrative is ahistorical and steeped in western liberal thinking and understanding of the peace-conflict theory propagated by international development scholars. To understand the DRC’s political and socio-economic conditions, one must begin with acknowledging the impact of Belgium’s colonial rule and the role it played in changing the country’s trajectory after independence.

The exploitation of land and resources in the Congo committed by King Leopold II was made possible by utilising the model applied by the Low Countries in Java. The oppressive methods used earned him the nickname “The butcher of the Congo,” and it is believed that under his rule (1885-1908) the population of the Congo was reduced by half.

According to journalist and historian Adam Hochschild, possibly 10 million Congolese people were killed, and died of diseases introduced by the colonisers and famines in the Congo Basin in 1899 and 1900.

Scholar Jules Marchal estimated King Leopold II amassed a fortune of 220 million francs from Congo during his lifetime, and the Belgian state undoubtedly benefited financially after taking over the Congo Free State from Leopold II.

The port of Antwerp grew to become the world’s second busiest after Liverpool, thanks to Congolese rubber and ivory shipments and then because of minerals. UMHK, an Anglo-Belgian company operating in the copper-rich region of Katanga, would later be involved in inciting Katanga to secede from the country.

The question of reparations is one that cannot be avoided, although one may ask what changes could possibly be made with the DRC in an arguably worse position than it was in the late 1800s.

The answer lies in Belgium’s colonial administration and stratification of Congolese society, as well as its connection with the CIA-backed assassination of Patrice Lumumba in January 1961.

Belgium’s involvement in Lumumba’s murder was established by authors such as Ludo De Witte, and was the subject of an inquiry within the Belgian Parliament in 2001-2002. This recognition of wrongdoing is one of the many steps towards healing and a meaningful relationship between the two nations.

In this instance, a call for reparations is tangible evidence of holding the state accountable for its actions in the atrocities committed. Empty words and performative gestures must come to an end and real action taken as exemplified by Germany.

Recently, DRC lawyers informed the International Court of Justice that they were seeking $4.3 billion in reparations from Uganda for its role in the conflicts in the country’s mineral-rich Ituri Province. It is evident that natural resources have been the reason for the DRC’s continuous exploitation by international organisations and countries alike.

As we approach the 61st anniversary of the DRC’s independence, we should bear in mind that the discourse of accountability is the standard by which all nations should be held towards. Franc Kunda is a British-Congolese researcher and has an MSc in Violence, Conflict and Development at SOAS University of London. 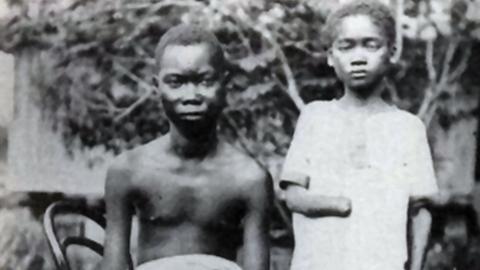