Can the esteemed scholar be trusted to speak truth to power, and should the public intellectual be held accountable to a higher standard?

Mike Pompeo, United States Secretary of State, announced the formation of the Commission on Unalienable Rights this Monday. The 10-member panel chosen by the former CIA director, will revise and supposedly reconceptualise "the role of human rights in American public policy".

Pompeo’s push to distinguish between original, unalienable human rights and others leads many to believe that the commission will not only promote religious rights as human rights, but also push issues important to conservatives in the United States.

However, what raised Muslims’ eyebrows the most was the inclusion, among its “varied background and beliefs”, of the famous Sheikh Hamza Yusuf.

The sheikh is arguably the most famous imam in America, and has been a polarising figure of late within the Muslim community. Relations between him and his own sheikh, Abdullah bin Bayyah to the United Arab Emirates, have, in the recent past, been particularly controversial.

Not only did the duo hold their Forum for Promoting Peace in Muslim Societies in the United Arab Emirates, but Sheikh Hamza went so far as to praise the UAE for its “ministry of tolerance”. The statement quickly became the subject of public backlash, given the UAE’s active role in the Saudi Arabian-led coalition war in Yemen putting 13 million people at risk of starvation.

Sheikh Hamza’s appointment comes after years of relations with the right.

After the September 11 attacks, the sheikh’s tone took on a much more reconciliatory tone, particularly in contrast to his previous critiques against American immortality and imperialism. In a matter of years, he established a number of alliances with key religious leaders in the US seeking to build a broad conservative base that would include Muslims.

However, in seeking to promote religious rights and freedoms and include Muslims as part of the conservative agenda in the US, the sheikh has also had to make crucial compromises.

After Trump’s election, the sheikh significantly downplayed his previous criticism of Trump, arguing instead that the president was “God’s servant”, and simply an agent of God’s will.

More worryingly, while the Trump administration was pushing for its Muslim ban, not only did the sheikh remain silent on the Muslim American community’s most pressing issue, he also attended the National Prayer Breakfast to network with religious leaders.

The sheikh’s alliance with Jewish leaders also meant accommodating such Zionist organisations as the Anti-Defamation League at the Forum for Promoting Peace, at the same time that the Trump administration and UAE are trying to bury Palestinian Muslims’ dreams.

Ironically enough, the same day the commission was announced that Pompeo and John Bolton, Trump’s neoconservative National Security Advisor, were at the Christians United for Israel summit, bragging of the Trump administration’s victories with Israel.

Many of Sheikh Hamza Yusuf’s supporters defend his appointment, as well as his previous political gambits, by relying on a long tradition in Islamic political history. In the past, ulema scholars would often give naseeha, or advice, to rulers.

Indeed, only earlier this month, the sheikh defended himself with the exact same line: Someone has to advise these governments.

This however raises the question: is the sheikh truly in a position to give naseeha, and does that in any way lower the bar of his complicity as a public intellectual and spiritual leader? More critically, has this administration’s actions displayed a willingness to listen to advice, especially with regard to Muslims?

In reality, the sheikh’s inclusion on the committee may have transpired for the reason of presenting a “token Muslim”, providing a Muslim rubberstamp of approval for programmes that would happen with or without him.

Another point many of the sheikh’s supporters use to defend him is that of Husn al dhan, or the practice of thinking the best of a brother in faith. Where however, does the informed public draw the line between thinking well and calling out naivety?

Given his record and the good he has done Muslim communities around the world, his recent actions have caused many a great deal of sadness.

There is nonetheless a question that needs to be asked. Even if the sheikh were in a position to give naseeha, can he be trusted to do so?

In this regard, one can only recall the naseeha Sheikh Hamza gave Preisdent Bush Jr. before the US campaign against Iraq. The sheikh was concerned that the military operation name ‘Infinite Justice’, was blasphemously close to one of Allah’s 99 names, and would offend Muslims.

Bush Jr. readily changed it to ‘Enduring Freedom’. The name changed and Muslims were still bombed.

To this end, can we trust the sheikh to ask this administration to review the role of human rights in American foreign policy against Muslims? More to the point, can the sheikh be trusted to mention that Muslims too are human? 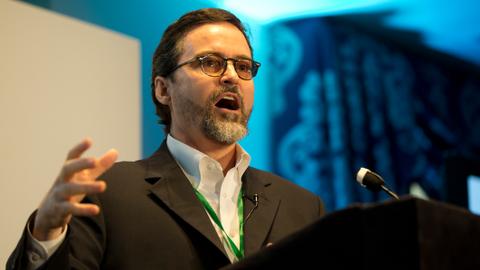 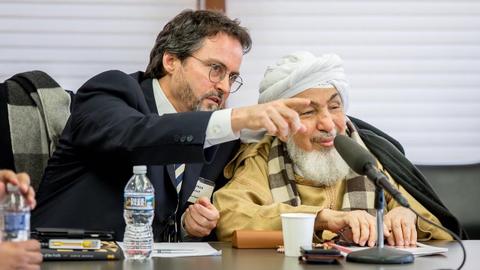