US official Brett McGurk recently implied that Turkey is to blame for al Qaeda's rise in northwestern Syria. The reality is that the blame lies with Syrian regime leader Bashar al Assad, who allowed al Qaeda to take advantage of US policy failures.

"How did [al Qaeda leader] Ayman al Zawahiri's deputy end up in Idlib [Syria]? Did he parachute in?", asked Special Presidential Envoy to the anti-Daesh coalition Brett McGurk at a recent panel in Washington D.C.

A diplomatic uproar ensued when the Turkish Ministry of Foreign Affairs sent a strongly worded demarche to the US government pushing back against insinuations that McGurk had made that suggested that Turkey was solely to blame for the rise of an al Qaeda affiliate in north western Syria.

Frustration with the special envoy had long been simmering as he is viewed as the primary cheerleader for the Syrian Kurdish separatist People's Defense Forces (PYD) fighting Daesh, who nonetheless maintain ongoing ties with the designated terrorist group the Kurdistan Worker's Party (PKK).

McGurk is viewed as having been a central architect in developing the US government's partnership with the PYD in battling Daesh in northern Syria. He has constantly referred to the PYD, which at the behest of the US military rebranded to the more innocuous sounding Syrian Democratic Forces SDF, as America's only reliable local partner in Syria in the fight against Daesh extremists.

But the friction between Washington and Ankara on this matter can really be traced back to the Obama administration's rejection in 2015 of a comprehensive plan proposed by Turkish President Erdogan that would have both protected Syrian civilians from the Assad regime's rapacious war planes and established safe zones, that in conjunction with a plan proposed by General John Allen – McGurk's former boss and predecessor – would offer the requisite space and a conducive operating environment to train and arm Syrian opposition forces. These forces would in return enjoy both US and Turkish close air support to clear extremists from the northern Syrian-Turkish border.

At the time, Daesh was expanding at a rapid pace but had not yet consolidated its recent military gains – thus they were more vulnerable to a determined counter attack. General Allen, who understood the complex mechanics of insurgency and counterinsurgency from his time commanding Marines in western Iraq, had long been sympathetic to the importance of empowering local Sunni Arab fighters.

Allowing the PYD to monopolise US military support in the fight against Daesh was not a fait accompli – Daesh had already been pushed out of northern Latakia, Idlib province, and western Aleppo province by Sunni Arab rebel forces.

Unfortunately, Obama reneged at the proposal to establish a full no-fly zone that would've provided air cover for northern Syria in its entirety, to include Aleppo city which at the time was facing horrific bombardment by Assad's forces and the newly arrived Iranian Revolutionary Guard and Hezbollah reinforcements.

Obama saw such an effort as being overly militarily taxing and geared towards toppling Bashar al-Assad – a goal which Obama believed to be distracting from the fight against Daesh.

Obama's advisors claimed that such a no-fly zone would prove difficult as it would entail having to neutralize the Syrian regime's integrated air defense system, which Obama was unwilling to authorize even though by all accounts Assad's air defence network by 2015 was functionally hollowed out (as multiple Israeli Air Force attacks deep into heavily defended Assad controlled territory would prove since).

Obama's decision would prove incredibly costly in the long run, leading to tens of thousands of civilians being killed or injured and tens of thousands more displaced – an environment that both Daesh and al Qaeda extremists were able to amply benefit from.

That decision in 2015 coupled with the now infamous Obama ‘red line' decision in 2013 that allowed the Assad regime to get away with a mass sarin killing of nearly two thousand civilians, is the real impetus behind why in 2017, al Qaeda affiliates are still active in northern Syria.

Naturally, such introspection was not on display in Washington.

The PYD's dominance and self administrated rule in wide swaths of northern Syria, that include areas that are ethnically majority Arab, did not have to be a forgone conclusion had a comprehensive—and yes more politically difficult decision—strategy been agreed upon by the Obama White House.

The same is equally true for al Qaeda's cells in northern Syria which were able to gain dominance over the local populace for a time by offering essential services, security, and protection from Assad and Iran's war machine.

The reality is the US knows exactly how Zawahiri's deputies arrived into northern Syria. US military officials have since 2006 complained of the free hand that the Assad regime had given to allow senior al Qaeda logistics facilitators tied to Atiyah Abdulrahman—a key Bin Laden lieutenant—to operate in eastern Syria.

US diplomatic cables available on Wikileaks confirmed that the US was well aware that Assad and his senior officials – including his brother in law who was head of military intelligence until 2009 – were cognizant if not complicit in Qaeda's operations on Syrian territory prior to the 2011 uprising.

General Petraeus, at the time Commanding General of US led Coalition forces in Iraq even offered President George W Bush to personally go to Syria to convince Assad to cooperate and end his tacit support to al Qaeda.

The head of Al Qaeda in Syria, Muhammad al-Jolani didn't parachute into Syria, he was already present in Syria and likely had been released from detention by the Assad regime prior to the 2011 uprising. Even the Khorosan network, which the US views as a major national security threat as Al Qaeda's international attack planning cell in north west Syria, was the original name of the Tehran based facilitation cell that Qaeda central leadership depended upon to facilitate movement of funds and personnel into Iraq and Syria.

McGurk himself had on numerous occasions been confronted by Iraqi officials in 2009 complaining of the Assad regime's facilitation of al Qaeda safe havens in Syria that were being used to slaughter and maim civilians in Iraq.

So in sum, the answer to the question of how did al Qaeda get to where it is in Syria today is answered by connecting the dots that the US security and intelligence officials themselves have laid out over the years: Assad and Iran were the catalysts behind their rise and revival in Syria.

We cannot relive history, but whitewashing the past to make geopolitical points against allies is a self defeating exercise meant to cover up one's own tragic mistakes – that have proven beyond costly for everyone involved in Syria. 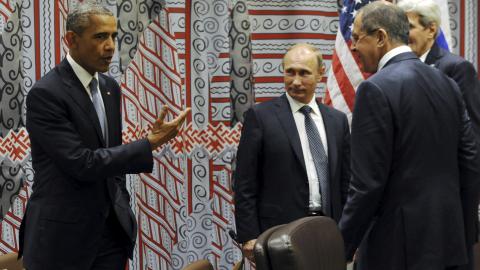