How the Syrian revolution turned into a global battlefield

The war in Syria is far removed from the ambitions of the protesters in Damascus in 2011. How did it get to this point and is there any hope left for the revolution?

This week marks the seventh anniversary of the Syrian revolution. A movement that began with peaceful street protests calling for reform and — after the government responded with lethal violence — the downfall of the dictator, descended into war that has to this point cost the lives of at least 500,000 people and displaced nearly twelve million others — more than half of Syria’s pre-war population.

In any strategic sense the rebellion has been defeated — it is not able to overthrow Bashar al-Assad by force on its own — and its political cause is increasingly strained as the remnants of the armed opposition are increasingly co-opted by external actors, state and non-state.

Within two weeks of the peaceful uprising beginning in March 2011, the Assad regime released hundreds of hardened Islamist prisoners from the infamous Sednaya Prison. Several more amnesties would follow, and by May 2011 the prison was emptied of its extremist inhabitants.

Already by this time, 1,000 people had been murdered by Assad’s crackdown and many more peaceful dissidents — political activists, journalists, students, doctors, lawyers — were “disappeared” into the regime’s prison camps, filling the cells vacated by the jihadists, and suffering an ordeal of near-indescribable cruelty that continues to this day.

The Assad regime had underwritten the Islamic State (Daesh) from bases in eastern Syria for its war in Iraq before the invasion even began, as a series of court cases in the United States — among a mountain of evidence — have demonstrated. As those networks turned inward, Assad encouraged the process.

“The regime did not just open the door to the prisons and let these extremists out, it facilitated them in their work, in their creation of armed brigades,” one defector later testified.

Sectarian atrocities were conducted in the deliberate hope of in-kind reprisals that would rally core constituencies around the regime. Once Daesh emerged, Assad left it unmolested for a year to build its “caliphate” and, when the rebellion and Daesh clashed, the regime — and later Russia — could be relied upon to intervene on Daesh’s side. Members of the regime have stated in public that they manipulated the Daesh threat to divide and discredit the opposition.

“Assad first changed the narrative of the newborn Syrian revolution to one of sectarianism, not reform,” wrote Bassam Barabandi, a diplomat for the Assad regime who defected during the war.

“He then fostered an extremist presence in Syria” and “facilitated the influx of foreign extremist fighters to threaten stability in the region. … The resulting international paralysis allowed Assad to present himself as an ally in the global war on terror, granting him license to crush civilians with impunity.”

Once Daesh had “fully matured,” concluded Barabandi, “the Assad regime and Iran offer[ed] themselves as partners” to defeat it.

It was on this proposition that the regime staked its life: it inflicted murder or worse on political moderates who tried to secure change in Syria with peaceful tactics, pushed the country into a violent confrontation through a “strategy of tension,” and then set about annihilating any opposition elements that could be negotiated with, while bolstering sectarian and extremist elements in the insurgency in an attempt to force a binary choice between the dictatorship and a jihadist takeover.

Assad’s calculation was that in such circumstances, he would be able to gain enough support, however grudging, from both Syrians and the international community, to survive.

“It’s a strategy to eliminate the [moderate opposition] and have the two main players face each other in Syria: Assad and the Islamic State,” explained one Assad ally in the summer of 2014. “And now [Assad] is asking the world to help, and the world can’t say no.”

The US and international community effectively played along with this strategy.

President Barack Obama declared in August 2011 that Assad must “step aside” and then did nothing for a year, eventually ordering a desultory CIA-run program, Operation Timber Sycamore, ostensibly to support the armed opposition. But the program, when it ended in January, had as its most conspicuous achievement preventing US allies supplying surface-to-air missiles to the rebellion — weapons that might have neutralised Assad’s main advantage: his air force.

Iran flooded foreign Shia militias into Syria to save Assad in 2012, and this prompted no reaction.

In 2013, President Barack Obama stepped back from enforcing the “red line” against Assad’s use of chemical weapons, damaging the mainstream moderate opposition and empowering extremists who had said all along that the West was an unreliable partner.

The moderates were further mauled by Daesh in a months-long fight in early 2014, during which pleas for Western assistance were ignored.

When the US finally did intervene in Syria in September 2014, it was with a message to Assad that his regime was off-limits and the targeting of Daesh in the east freed up Assad’s resources to intensify his war on the mainstream opposition in the west.

When Russia intervened directly in Syria a year after the US, it targeted armed opposition who mistakenly thought they had American backing. With the US unwilling to supply the minimal force needed to hinder Russia, the tide had been decisively militarily turned by the time Moscow declared a partial withdrawal in March 2016.

With the rebellion weakened and fragmented, pieces of it began to be repurposed by external actors. Russia solidified the trend Assad started by enabling Al Qaeda to co-opt larger and larger sections of the insurgency as the year went on.

America had only ever been seriously interested in the opposition to the extent that they were useful against Daesh, and some agreed to quit the anti-Assad fight and join America’s counter-terrorism program.

The enthusiasm of many states backing the rebellion had been waning for some time and after Russia’s intervention it disappeared. Jordan was the first, with opposition in the south converted into a border guard in all-but name. Saudi Arabia also got the message that Russia was in the driving seat, US policy having been outsourced to Moscow some time before. Qatar, despite the rhetoric, was gradually frozen out of the rebel file over 2016.

The killer blow was Turkey’s reorientation of policy in the summer of 2016, giving up its anti-Assad aims and redirecting its rebel allies and dependencies to focus on Ankara’s more immediate concerns, Daesh and the YPG/PKK, which was gaining strength as a result of the US anti-Daesh campaign.

Ankara cut a deal with Russia that restricted the flow of supplies to Aleppo city, the final urban bastion of the mainstream rebellion, allowing it to fall in December 2016, in exchange for a Turkish safe zone in north-eastern Aleppo.

After Aleppo’s collapse, the remnants of the northern opposition were owned by Turkey.

Al Qaeda consolidated its hold over some additional rebel formations. America’s YPG allies absorbed some rebel groups as political cover for their rule in Arab-majority areas and some armed opposition prepared to solely conduct anti-Daesh operations were housed at the US base in al Tanf in southern Syria. Meanwhile, armed opposition in the south guarded Jordan’s frontier and increasingly Israel’s.

This situation largely held through 2017, with the armed opposition in particular in a kind of suspended animation as America accelerated its anti-Daesh campaign and the pro-Assad coalition finally mounted a serious offensive against Daesh — to grab the land it occupied before US allies did.

With American-led coalition support, Daesh was driven from Mosul and Raqqa, and, after inviting the pro-Assad coalition to take as much of Deir Ezzor as it could, the US assisted the YPG in taking the rest.

No sooner had everyone finished declaring victory when reality intruded, and the underlying conflicts, of which Daesh is merely a symptom, re-erupted: Russia’s base on the Syrian coast came under attack by opposition forces, quite possibly abetted by a state; Turkey entered Afrin to deal with the YPG; Turkey attacked Iranian militias in Idlib to compel their compliance with the “de-escalation” agreement; Israel escalated the scope and scale of its attacks on Iran in Syria; and the US launched airstrikes to defend its forces from an attack by Russian-led pro-Assad forces that killed hundreds of people.

For the armed opposition, though these recent tectonic shifts portend an unravelling of the fragile landscape that appeared to have taken hold at the end of 2017, it does not seem likely to alter their status as adjuncts to the agendas of outsiders. This is not to say the opposition will not have opportunities. Already, Turkey’s operation in Afrin — and the YPG’s very serious miscalculations in response — have left Ankara firmly opposed to the return of the regime to the area, which it had until-recently countenanced as preferable to the YPG.

The re-energising of Turkey’s support for the opposition as trusted instruments and the unification with the Euphrates Shield zone provide some additional space for those keeping alive the original ideals of the revolution.

It is a very circumscribed existence, however, and no possible outcome now comports with what those brave Syrians who took to the streets seven years ago had in mind. 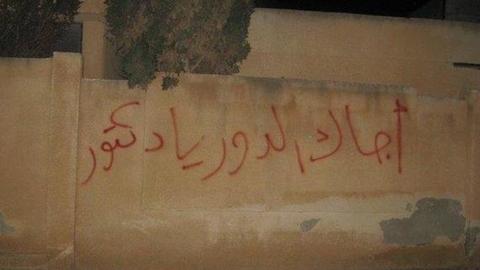 Where did the Syrian revolution go wrong?